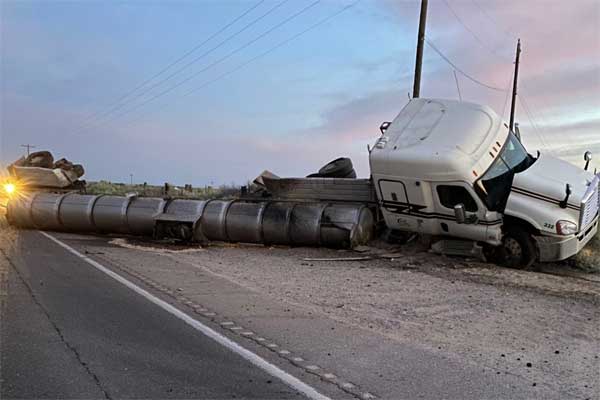 Contributed Photo. A semi carrying sulphuric acid spilled its load after an SUV crossed the centerline and collided with the truck on U.S. Highway 70 near Pima Wednesday.

PIMA — A Fort Thomas man was severely injured when the vehicle he was driving crossed the centerline on U.S. Highway 70, and collided with a semi-truck hauling sulphuric acid.

The crash occurred at milepost 326 near Pima on Wednesday night at about 11:30 p.m.

The 19-year-old driver of the 1998 Toyota 4-Runner sport utility vehicle had to be extricated from his vehicle by Pima Fire. He was transported to Mt. Graham Regional Medical Center with severe, nonlife-threatening injuries, before being transported to a Tucson hospital.

The driver of the 2009 Freightliner truck, identified as a 24-year-old man from Thatcher, was uninjured; however, his vehicle rolled and the majority of sulphuric acid leaked out of the truck, forcing the closure of the eastbound lane of U.S. Highway 70 until after 1 a.m. Thursday, while DPS HazMat crews conducted the cleanup.

Arizona Department of Public Safety said investigation into what caused the SUV to veer out of its lane is ongoing.