Photo By Raymundo Frasquillo: Former players listened to their head coach Vernon Friedli lead them in a pre-game prayer one final time via an archived video.

TUCSON – Coaches play a large role in guiding and molding young lives into the rest of their existence. Life lessons and values are touched on, yet student-athletes thought all they were doing was learning how to play a game.

As the season and home opener for Morenci draws near, the influence and impact of athletic coaches surfaces in how they are remembered by those whose lives were influenced and impacted. 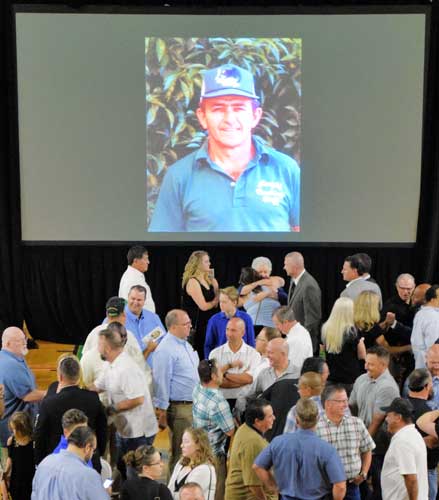 Photo By Raymundo Frasquillo: A public tribute was held for Vernon F. Friedli in Tucson earlier this month.

Over the course of his tenure, his teams qualified for the post-season 78 percent (28-36) of the time, and Friedli Field is named in his honor. He held the state career wins record (331) when retiring five years ago, until it was broken last season.

Former players across the decades gathered at center court in Amphitheater’s George F. Genung Activity Center, took a knee, held hands, bowed, and listened to their coach lead them in a pre-game prayer one last time via an archived video.

Middle son Ted Friedli (AHS Class of 1986) said the next sound normally heard was the snap of chin straps being fastened to the helmets.

Mrs. Friedli thanked them for caring and for being part of their lives.

“He (Friedli) impacted all going to all walks of life,” colleague and friend Mike Piccone said. “He had a significant impact on your life, teaching you to deal with the good and the bad. All have overachieved on the field, in the classroom, and in life.” 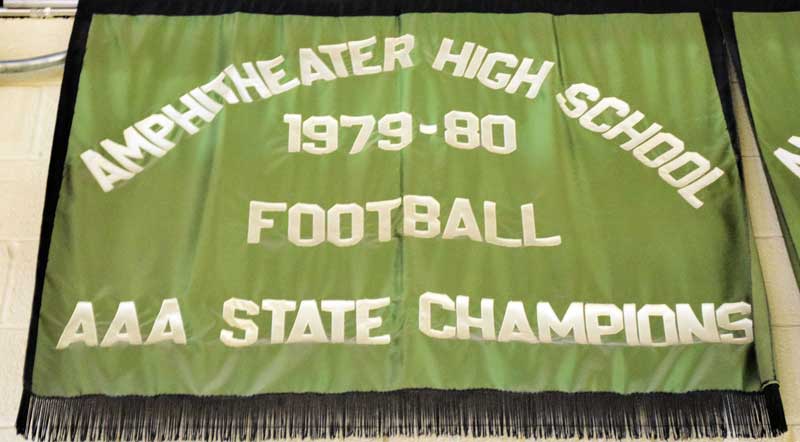 Photo By Raymundo Frasquillo: A fading big enrollment schools state championship football banner hangs in Amphitheater High’s George F. Genung Activity Center. The Panthers qualified for the post-season 78 percent (28-36) of the time under Friedli and earned one title during his tenure.

“He was not dad, he was coach,” oldest son Tim Friedli (AHS 1984) said. “We are all part of what made him. You can’t hold your head high unless you’ve given everything you had; nobody is number one until you prove it my dad would say. He used nicknames in a teasing way and loved to make people laugh.”

“I learned how to ride a bike on Morenci’s football field,” Tim said. “It was as hard as the gym floor, with patches of grass here and there.”

“He represented football, we are all brothers in football,” former player and current head coach Matt Johnson said. “He challenged all to achieve greatness and success, drive to push past average, always give your best, get through the tough times and achieve something great.”

“Compassion was his philosophy in working with kids,” the middle son said. “There are only four times in my life I remember ever seeing him cry. One of them was when he read the transcript of the book on the Morenci Nine.” It was authored by A.S.U. History and Political Science Professor Kyle Longley.

“My mother told my father, “You do what you do, I’ll take care of everything else,” Ted Friedli said. 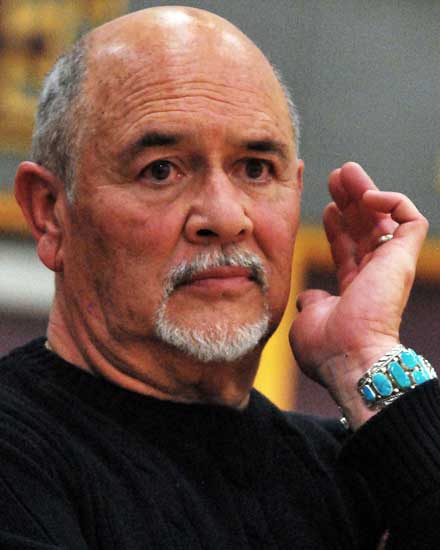 Photo By Raymundo Frasquillo: Morenci Spanish instructor and Coach Steve Chavez was both a student-athlete and an assistant coach under Vernon Friedli at Morenci.

Friedli came to Morenci with both bachelors and masters degrees in hand, after having taught swimming safety and American Legion baseball in Tucson, as a physical education teacher. The Theater and Arts major earned his master’s degree with honors.

The initial Wildcats baseball team under Friedli finished 4-12 while his last two ended 17-5 as state finalists, champions in 1973 and runners-up in 1974.

On the gridiron, after two seasons as an assistant under Truman Williamson, his first team went 5-5, his fourth a region champion and state semifinalist at 8-2, and his last ended as state runners-up with a 10-3 mark.

One of those influenced by Friedli was current MHS Spanish instructor Steve Chavez who returned to school after a two-week absence.

Although not in the classroom, he was still teaching his students by example, that which is important . . . family.

His daughter, long ago out of the house, was involved in an automobile mishap requiring hospitalization in late June. Chavez was at her side in a Phoenix area hospital.

It is part of a value system instilled in him by his parents and reinforced by coaches, a position he also holds in the district.

Chavez (MHS Class of 1967) was both a student-athlete and assistant coach under Coach Friedli.

“He was a good coach and mentor,” Chavez said.