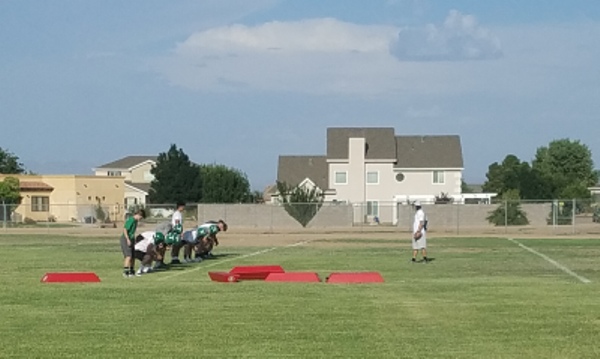 Thatcher might have the best offensive line they’ve every had this season. They won several big man challenges over the summer against much bigger schools. “Fear the Veer” starts up front and these guys will get it done again this year.

The Eagles return all 4 of their top running backs from last season. Leading rusher Riley Morris lead the dominant rushing attack with 650 yards and 11 touchdowns. You can’t count out Quinten Turley, Brock Jones or Tevin Clark taking it to the house any time they get the ball.

Jack Kortsen will take over at quaterback. The 6’3″ QB isn’t your prototypical Thatcher signal caller. He can throw the ball with the best in the state. That probably won’t matter this year with Don Conrad taking over the play calling as the Offensive Coordinator. He might throw the ball even less than Sean Hinton did last season. If Kortsen can get comfortable in the offense, he will have a big year.

If Thatcher throws the football, the main target will be 6’6″ Tight End Cole Motes. He recently committed to Utah State University and catches everything in his wingspan. He will be used mostly as a blocker in the run first attack.

There might be only 1 or 2 holes to fill on defense this year for the Eagles. The top 5 tacklers all return this season. Thatcher only gave up over 20 points in a game twice last year, both of them wins. They held opponents to single digit scoring in 8 games last year. With many of the players playing on both sides of the ball, health will be a huge key to success this season.

It’s been said numerous ways over the years but the quote goes, “It’s not what happens to you, it’s how you react to it.” That will be the key in Week 0 for Thatcher. They will host rival Morenci to start the season and will know right away if the head coaching change will have an affect on the team and their transition to the current situation. Thatcher might have the toughest non-conference schedule in the 2A Conference and will be tested early. I think it is unrealistic to think another 13-1 season is on the horizon for the Eagles but are definitely the favorite to cap of the three-peat.