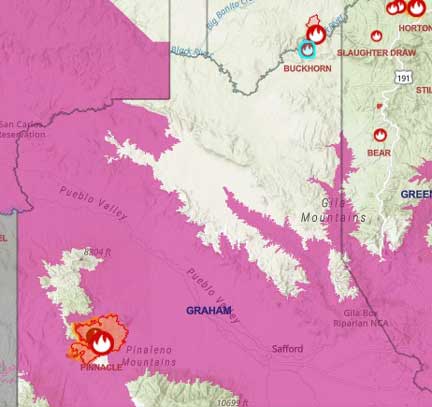 KLONDYKE — Containment of the Pinnacle fire reduced overnight due to the fire’s perimeter increasing; however, the fire is showing less activity than previous days.

The fire is moving into very rocky terrain in the Santa Teresa Wilderness, giving it less fuel to consume.

Fire lines have been holding and burn-outs near Klondyke have proven successful, preventing the fire from encroaching on structures in that area. The eastern portion of the fire has also remained calm, allowing residents north of Aravaipa/Klondyke Road to return to their homes.

However, all residents in the Black Rock Road area and those in the Klondyke-Aravaipa corridor remain evacuated.

The fire is at 26,460 acres and is at 10 percent containment. Based on weather patterns, smoke from the fire is expected to downgrade the Gila Valley’s air quality to moderate during the weekend.

The Buckhorn fire in northeastern Graham County was discovered Thursday afternoon and is at 15 acres as of Friday afternoon.

Cause of the Pinnacle fire has not yet been determined, while the Buckhorn fire is believed to have started from natural causes.