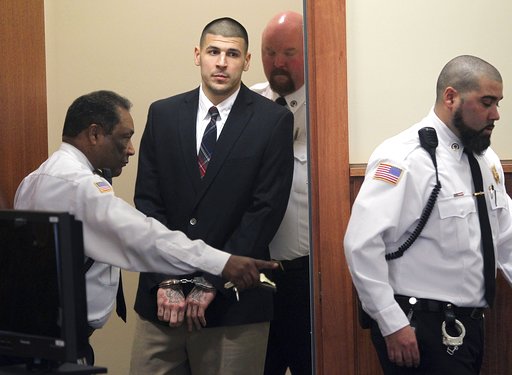 BOSTON (AP) — Hours before his former New England Patriots teammates were due to visit the White House to celebrate their Super Bowl victory, prison officials say, Aaron Hernandez tied one end of his bedsheet to a window and the other around his neck and hanged himself.

In a maximum-security prison outside Boston, about an hour from the stadium where he played alongside stars like Tom Brady and Rob Gronkowsi, Hernandez jammed the door to his one-man cell lest guards try to stop him, and put an early end to the life-without-parole sentence he received for a 2013 murder. 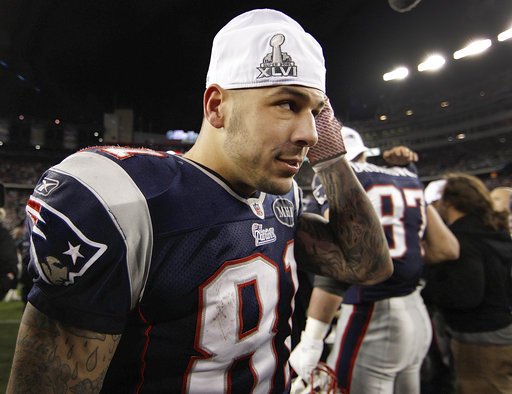 FILE – In this Sunday, Jan. 22, 2012, file photo, New England Patriots tight end Aaron Hernandez puts on a Super Bowl cap following the AFC Championship NFL football game against the Baltimore Ravens in Foxborough, Mass. Hernandez, who was serving a life sentence for a murder conviction and just days ago was acquitted of a double murder, died after hanging himself in his prison cell Wednesday, April 19, 2017, Massachusetts prisons officials said. (AP Photo/Winslow Townson, File)

It was the last act in the downfall of an athlete who once seemed to have everything — including a five-year $40 million contract extension — and threw it all away.

The former NFL star’s death left friends, family and his legal team shocked and in disbelief, searching for an explanation. Just last Friday, Hernandez was acquitted in a separate murder case.

“There were no conversations or correspondence from Aaron to his family or legal team that would have indicated anything like this was possible,” said his attorney, Jose Baez.

“Aaron was looking forward to an opportunity for a second chance to prove his innocence. Those who love and care about him are heartbroken and determined to find the truth surrounding his untimely death.”

Guards found Hernandez shortly after 3 a.m. Wednesday at the state prison in Shirley, Correction Department spokesman Christopher Fallon said. The former tight end was taken to a hospital and pronounced dead about an hour later.

Fallon said he was not aware of any suicide note and officials had no reason to believe Hernandez was suicidal. Otherwise, he would have been transferred to a mental health unit, Fallon said.

The Worcester County district attorney’s office and the Correction Department are investigating.

The Patriots had no immediate comment. At the White House event in the afternoon, President Donald Trump congratulated the Super Bowl champions but made no mention of Hernandez.

A star tight end for the University of Florida when it won the 2008 national championship, Hernandez dropped to the fourth round of the NFL draft because of trouble in college that included a failed drug test and a bar fight. His name had also come up in an investigation into a shooting.

Still, he was a productive tight end for the Patriots for three seasons. After catching 79 passes for 910 yards and seven touchdowns in his second year to help the team reach the Super Bowl.

But the Patriots released him in 2013, shortly after he was arrested in the killing of semi-pro football player Odin Lloyd, who was dating the sister of Hernandez’s fiancee. Hernandez was convicted and sentenced to life in prison. 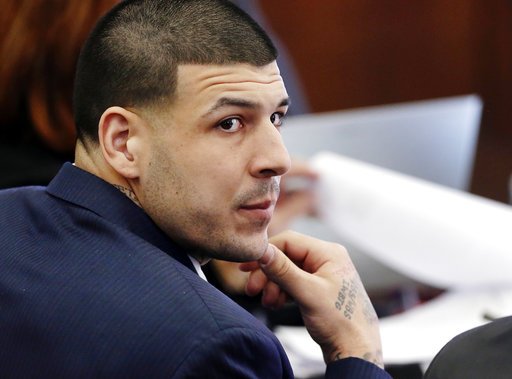 Last week, Hernandez was acquitted in the 2012 drive-by shootings of two men in Boston. As the jury was deliberating, cameras spied Hernandez blowing kisses to the young daughter he fathered with fiancée Shayanna Jenkins.

Prosecutors said he gunned the two men down after one accidentally spilled a drink on him in a nightclub. Hernandez then got a tattoo of a handgun and the words “God Forgives” to commemorate the crime, according to prosecutors.

In the Dorchester neighborhood where Lloyd grew up, a family friend of the victim wondered if Hernandez could no longer bear the weight of his crime and his squandered potential.

“I just think it got to him — the guilt,” Mixson Philip said. “Each man has to live with himself. You can put on an act like nothing happened, but you’ve got a soul. You’ve got a heart. You can’t say you don’t think about these things. There’s no going around that.”

Miami Dolphins center Mike Pouncey said on Instagram that he spoke with his former college teammate a day earlier.

“Today my heart hurts as I got the worse news I could have imagined,” he said. “I will forever miss you and love you bro.”

Friends were also grieving in Connecticut, where Hernandez was raised.

“Especially after him getting acquitted of the double murder. That was a positive thing in our minds,” said Alex Cugno, who grew up with Hernandez in Bristol.

“I don’t believe that he would have killed himself. It just doesn’t add up. It’s fishy. It makes you wonder what really went on behind those walls in prison.”