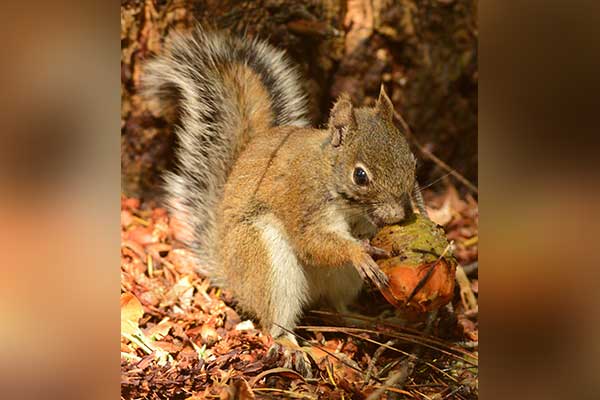 Arizona’s embattled Mount Graham red squirrel population grew 4% in 2019, providing proof that the endangered squirrel continues its fight back two years after nearly being wiped out by a devastating wildfire.

The stabilization of the population over the past year comes after much of the territorial squirrel’s habitat was severely damaged in 2017 by the Frye Fire in the Pinaleño Mountains in southeastern Arizona. In September, the annual survey found a minimum estimate of 78 squirrels, which is in line with the 75 squirrels found in 2018.

The annual population estimate is made by monitoring all known midden locations for activity. The middens — areas where red squirrels store their spruce, fir and pinecone cache for the upcoming winter — are then surveyed every fall by the Arizona Game and Fish Department, Coronado National Forest, U.S. Fish and Wildlife Service, Arizona Center for Nature Conservation – Phoenix Zoo, and the University of Arizona.

The Mount Graham red squirrel is a subspecies that can only be found in the upper elevation conifer forests of the Pinaleño Mountains. The squirrel’s population peaked at about 550 in the late 1990s, but typically ranged between 200 and 300 before the Frye Fire. The subspecies was thought to have been extinct in the 1950s, but was rediscovered decades later and granted protection under the Endangered Species Act in 1987.

Its diet consists primarily of conifer seeds, but also includes insects, mushrooms, bird eggs, nestlings and other items. Mount Graham red squirrels are highly territorial and will aggressively defend their middens or food cache. In addition, they have lower reproductive rates and a shorter average lifespan than other subspecies of red squirrels.

Further complicating its recovery are long-term impacts to squirrel habitat from high-intensity wildfires that can reduce food sources and cover from predators. There’s also increased competition for food with non-native Abert’s squirrels and poor cone crops caused by drought — all of which can influence population estimates.

Biologists continue their research to explore new methods to help conserve and protect the species and develop long-term forest management strategies across the fire-impacted landscape, such as re-seeding and planting coniferous trees and a managed care breeding program.

How You Can Help

To learn more about how AZGFD works to conserve and protect the state’s wildlife, visit www.azgfd.gov. To provide a contribution to support the department’s on-the-ground conservation efforts, visit www.azwildlifehero.com