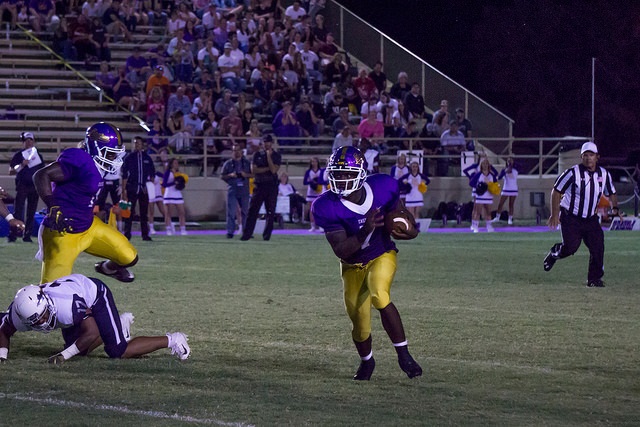 Eastern Arizona was able to avenge an early season non-conference loss Saturday with a 21-0 win over Arizona Western. The 14th ranked Gila Monsters used a stout defense and great special teams to slow down and frustrate the visiting 17th ranked Matadors.

The potent Gila Monster rushing attack was able to rack up 234 yards rushing and two touchdowns. Quarterback Ishois Times punched in the first score of the night on a 5 yard run give EAC the 7-0  lead with 5:26 remaining in the 1st half. That would be the only points scored by either team in the first half. AWC missed two field goal attempts but other than that, never threatened to score.

The Gila Monsters second score of the night came just 16 seconds into the 2nd half when Jermaine Ziegler returned the kickoff 96 yards and a 14-0. The teams traded field position for the remainder of the 3rd quarter and most of the 4th quarter before EAC running back Wilber Cooper capped his 124 yard night with a 9 yard run. The Gila Monster defense took care of the rest and the Gila Monsters coasted to the win.

The win moves EAC to 8-2 overall and 5-1 in the WSFL. Snow College will make the trip to EAC next Saturday for the WSFL Championship game. Kickoff is scheduled for 7pm.