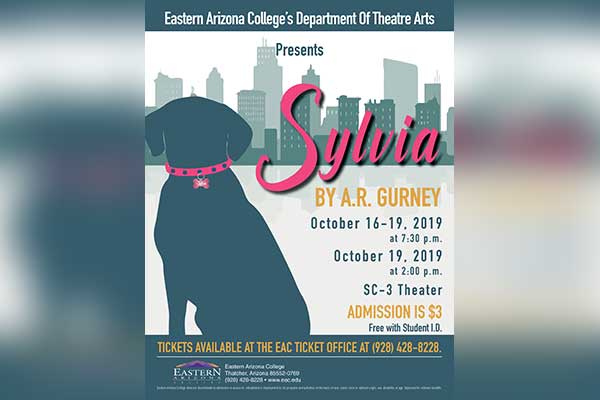 THATCHER, Ariz.—Eastern Arizona College’s Department of Theatre Arts is proud to produce Sylvia written by A. R. Gurney and directed by Elizabeth Henley. It’s the story of empty nesters whose life gets turned upside-down when a stray dog moves in. “Sylvia,” the pooch from the park, comes into their lives when they least expect it and especially when they need it the most.

From beginning to end, this modern comedy is full of physical humor as the couple navigates their relationship in the midst of their furry new arrival. Even more exciting for the department, its cast predominantly features the talents of its freshmen group of actors.  They are looking forward to sharing their hard work and passion with audiences in the Gila Valley.

“Playing a dog has been quite the ride,” says Sydni Curtis, who plays “Sylvia.” “One of my favorite parts about this challenge has been discovering the emotional and physical changes of being a new dog in a new place to a ‘man’s best friend.”

The entire team has been working to bring the characters to life. “The character I play is Kate and she is so different than me,” Larissa Popke said.  “It is a challenge to learn how to portray her for sure, but ‘Kate’ has brought out a confidence in me that I didn’t know was there.”

Sylvia will be performed in the SC-3 Theater October 16-19 at 7:30 p.m., with a matinee performance on October 19 at 2 p.m.  General Admission is $5. Tickets can be purchased at the door before each performance or by calling Eastern Arizona College’s Ticket Office at (928) 428-8228.  Advanced reservations are recommended, as seating for this production is very limited.