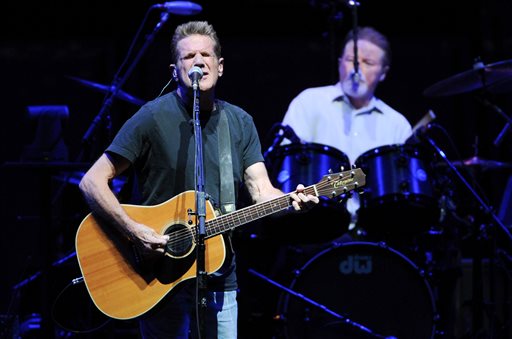 FILE - In this Nov. 8, 2013, file photo, musicians Glenn Frey, left, and Don Henley, of the Eagles, perform at Madison Square Garden in New York. Frey, who co-founded the Eagles and with Henley became one of history's most successful songwriting teams with such hits as "Hotel California" and "Life in the Fast Lane," has died at age 67. He died Monday, Jan. 18, 2016, in New York. (Photo by Evan Agostini/Invision/AP, File)

Although they weren’t the first to mix country and rock sounds, the Eagles popularized that musical cross-cultural style for a widespread fan base that would define the music of the 1970s. Decades later, their influence continues to ripple on in country music.

Brad Paisley, Keith Urban, Lady Antebellum and many more posted tributes online to the 67-year-old prolific singer, guitarist and songwriter after his death on Monday.

Songwriter and singer J.D. Souther, Frey’s longtime friend and collaborator on several Eagles hits including “Best of My Love” and “New Kid In Town,” said they were both influenced by classic country artists when they began writing together after meeting in Los Angeles in the late 1960s.

“He and I were listening to traditional country music, meaning Merle Haggard, Buck Owens and particularly George Jones, which was my fix,” Souther said Tuesday. “And everyone knew Hank Williams.”

They formed the band Longbranch Pennywhistle and were writing with Jackson Browne, before Frey and Don Henley met up to play in Linda Ronstadt’s band.

“We’d call ourselves the Gentlemen Boys, for reasons that were probably lost in the haze of some evening,” Souther said.

Despite breaking up in 1980, the Eagles, and their culturally ubiquitous greatest hits records, were one of the top influencers on the sound of country music in the 1990s, said Peter Cooper, museum editor at the Country Music Hall of Fame and Museum.

“Just about anyone playing music in a Nashville studio was heavily influenced by those records or has heard those records hundreds of times,” Cooper said.

Willie Nelson covered “Take It to The Limit” for his 1983 duet album of the same name with Waylon Jennings and Conway Twitty did his version of “Heartache Tonight” on his 1983 album, “Lost in the Feeling.”

The era’s biggest country stars, including Brooks and Dunn, Vince Gill, Trisha Yearwood, Alan Jackson and Clint Black, collaborated on an Eagles’ tribute album in 1993 called “Common Thread: The Songs of the Eagles,” that went multiplatinum and was named album of the year in 1994 by the Country Music Association.

Black said in a statement that Frey was one of the greatest American songwriters.

“I’ve always said he and Don Henley were America’s answer to Lennon and McCartney,” Black said.

Country singer Lorrie Morgan, who sang the Souther-Frey song “The Sad Cafe” on the tribute album, said in an interview Tuesday that the first concert her parents ever let her go see by herself, other than the Grand Ole Opry shows, was the Eagles. She instantly had a crush on the band.

“It wasn’t hard rock n’ roll, and it wasn’t hard on your ears,” she said. “They had a cool looking vibe. And even to me back then, they sounded country to me. They had a steel guitar.”

Country singer Suzy Bogguss, who sang “Take It To The Limit” on the tribute album, said their songs were some of the first that she learned to play on the guitar.

“A lot of the Glenn Frey songs are the real storytelling songs,” Bogguss said Tuesday. “And then there were these big choruses which everyone could harmonize on.”

The popularity of “Common Thread,” which hit No. 1 on Billboard’s country chart and No. 3 on the Top 200, was one more reason to push the Eagles to reunite in 1994.

They were truly accepted in all genres, as evidenced by their last studio album, “Long Road Out of Eden,” a two-CD album released in 2007. The Recording Academy gave them a Grammy award for best country performance by a duo or group with vocals for Souther’s song, “How Long,” and a Grammy award for best pop instrumental performance for Frey’s song, “I Dreamed There Was No War.”

Souther said there are always younger artists that will try to emulate Frey’s voice and songwriting, but he was a unique and gifted individual.

“I miss him already,” Souther said. “I still think of him the way he was the first year we roomed together, just laughing a lot, writing songs every day and just that endless groove that seemed to live inside of him.”