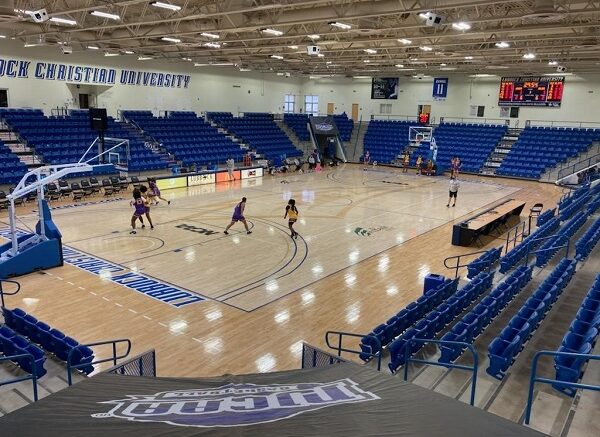 Eastern Arizona gets some court time at Lubbock Christian on Saturday. Contributed Photo

LUBBOCK, TX. — For the first time since the 2015/2016 basketball season the Eastern Arizona College Women’s Basketball team has qualified for the National Tournament.

The 24 team tipped off Monday at the Rip Griffin Center on the campus of Lubbock Christian University. EAC was named at the 19th seed in the tournament and will play #14 Moberly Area CC from Missouri.

Eastern enters the tournament with an impressive 16-2 record, winning the final five games in a row to end the season, and the West District championship. Moberly is 18-5 and were the runner-up to undefeated Three Rivers CC in the Central District Championship game.

Three Rivers survived their first round game on Monday 76-74 over Eastern Oklahoma State.

This is the first trip to the National Tournament for 4th year head coach, Cameron Turner. When he spoke with GilaValleyCentral on Monday afternoon he was all business however.

“We are very excited to be here and represent the West Coast,” Turner said. We are looking forward to playing Moberly Area, they like to press and play fast. We are going to have to be relaxed and move the ball well. Moberly have seen more zone defense than man to man this year. That is very unique. We will be the first team they have seen all year a team that will pressure them in the half court.”

Turner added, “We just have to be us, defend, rebound and execute.”

The game is scheduled for 10am Central, which is 8am in Arizona. The NJCAA Network will broadcast the game for a $10 fee. You can watch the game by clicking here.

KWIX Radio will broadcast the game for free online. You can hear the game by clicking here.