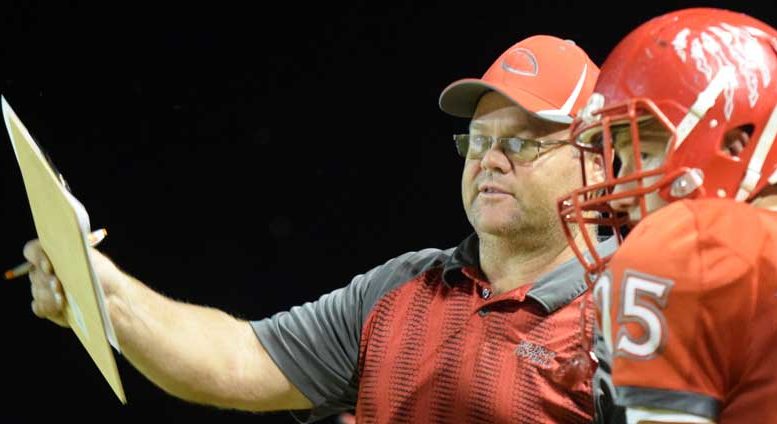 DUNCAN – It takes some us longer to learn than others. We all learn at a different rate.

Although the Duncan Wildkats crossed the goal line the first time they touched the ball during the season opener last month, it was on a long kickoff return. An offensive touchdown was scored in the season’s sixth period of play following numerous repetitions and scoreless possessions.

Senior Kade Stacy took the opening kick-off and returned it 93 yards for a score. Junior Wesley Conyer added the conversion run and the Wildkats led 8-0 early in the contest, an 8-38 loss to the Hayden Lobos in Winkelman on Aug. 18.

In the ensuing three contests, losses of 20-66 to the Phoenix NFL Yet College Prep Eagles on Packer Field on Aug. 25, 6-60 to the Panthers in Superior on Sept. 1, and 0-53 to the Goodyear Trivium Prep Crimson Knights on Sept. 8, the Wildkats have gained experience and triumphs in some aspects of the game. 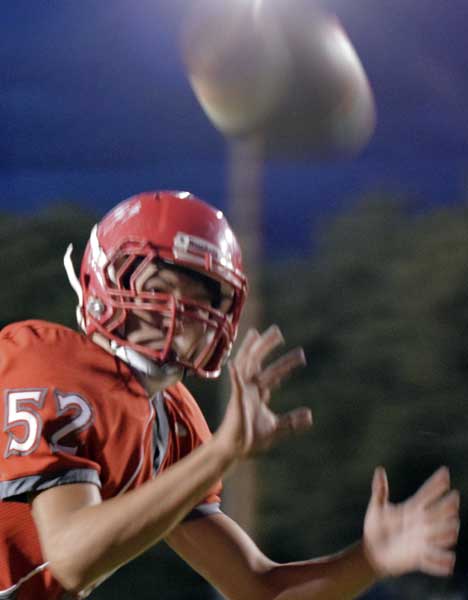 Photo By Raymundo Frasquillo: Cliff Hansen watches the ball into his hands during warm-up drills prior to the games’ start. The sophomore caught two passes (33, 51 yards) from classmate Christopher Smith, accounting for the only scores against Valley Union. The Blue Devils left Packer Field with a 58-12 win Sept. 22.

Following a bye week to heal and rest up, the underclassmen-laden team hosted the Elfrida Valley Union Blue Devils on Sept. 22. Stacy (injured) and Conyer (ejected) were not among the 14 suited up.

The Wildkats made do with what they had, holding brief advantages by scoring on their initial two possessions, but not their last seven. Valley Union scored on each of its eight possessions and prevailed 58-12.

The home team received the opening kick, drove 65 yards in six plays using 3:19. Basteen totaled 30 yards on four carries and sophomore Cliff Hansen capped the drive on a Christopher Smith pass reception for a touchdown with 8:41 left in the period.

Valley Union senior George Adcock covered 80 yards on two runs, for seven and 73 yards to tie the score 49 seconds later. A conversion run gave the Blue Devils a 2-point advantage with 7:49 left in the period. 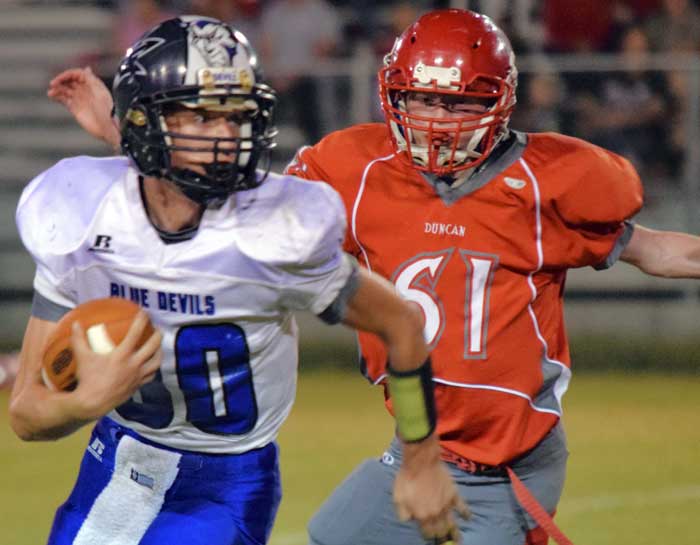 Photo By Raymundo Frasquillo: Duncan junior Michael McGrath (No. 61) spoiled a conversion pass attempt by sacking Valley Union quarterback Kelan Richardson (80) in the final 29 seconds of the first half.

The Wildkats drove 80 yards in nine plays using 5:29 with three different rushers and a pair of pass receptions. Basteen gained 19 yards on three carries, sophomore Cesar Contreras a yard on one carry, and Smith seven yards on two carries. Hansen caught two passes for 53 yards, scoring from four yards out with 2:20 left in the first period.

Valley Union scored 50 unanswered points, its next six in 28 seconds and the final eight with four seconds elapsed in the fourth period, prompting a running clock. 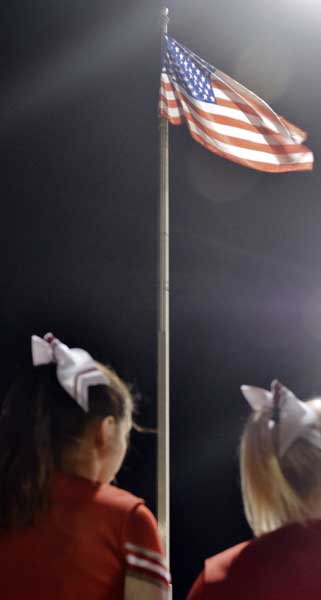 Photo By Raymundo Frasquillo: Cheerleaders raise Old Glory and stand at attention to honor it prior to kick-off.

The Blue Devils covered 52 yards with three different rushers to lead 14-12 with 1:37 left in the first period, senior Jesus Smith ran in from 36 yards out.

Senior Kelan Richardson connected with classmate Derek Hahn on a 30-yard score, capping a 62-yard drive in 10 plays using 4:35. Smith made the conversion run for a 22-12 lead with 7:59 left in the second period.

Richardson covered 51 yards after Smith ran for 13, scoring in 20 seconds for his first of three rushing touchdowns. Hahn’s conversion run made it 30-12 with 5:44 left in the second period.

Smith crossed in from a yard out to cap a 49-yard drive in four plays using 38 seconds. The quarterback was sacked on the conversion attempt by Duncan sophomore Michael McGrath. Valley Union led 36-12 with 29 seconds left in the first half.

The Blue Devils received the second half kick-off and recovered two fumbles in covering 61 yards in eight plays using 3:05. Richardson ran in from 13 yards out for a 42-12 advantage with 8:16 left in the third period. Duncan senior Matthew blocked Richardson’s conversion pass attempt.

Richardson capped a 5-play, 73-yard drive with a 56-yard run. Hahn added the conversion run for a 50-12 VUHS advantage with 2:22 left in the third period.

Smith completed 3-9 passes for 86 yards with an interception. Basteen caught a pass for 49 yards and Hansen 2-37.