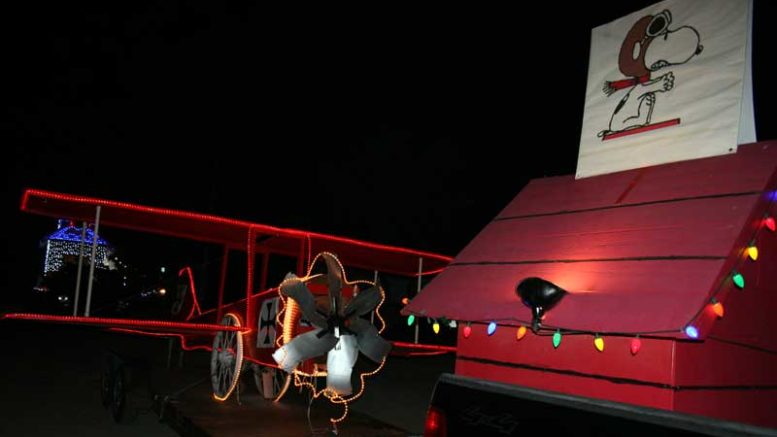 Photo By Gualterio Casias: The Red Baron's Fokker bi-plane chases Snoopy on his version of an airplane at the 2017 Duncan Festival of Lights. The float, created by the Martin Neave family of Lordsburg, N.M, was a big hit among parade watchers who lined U.S. Highway 70 for the town of Duncan's 12th annual Festival and Parade of Lights. The float was one of three brought by Lordsburg folks for the parade. Thankfully, it was not a windy day as the Neaves made the 32-mile journey from Lordsburg to Duncan.

DUNCAN – The well-known Boy Scouts motto is to be prepared. However, there was a bit of a setback in preparedness for two Boy Scout Troops during the Dec. 9 Duncan Festival of Lights Parade. The generator on the scouts’ float ran out of gas just before the beginning of the parade.

That meant having to tow the float to the nearest gas station for a fill-up. It caused about a 10-minute delay before the process got underway. But no one was bothered nor became all shook up about it. Afterall, it was Duncan where people are pretty easy going. The Scouts took a little ribbing about running out of gas, but otherwise, it was no big deal.

Besides, the Scouts had been working on their float since about 4:30 in the afternoon and that contributed to the gas tank eventually coming to a halt. 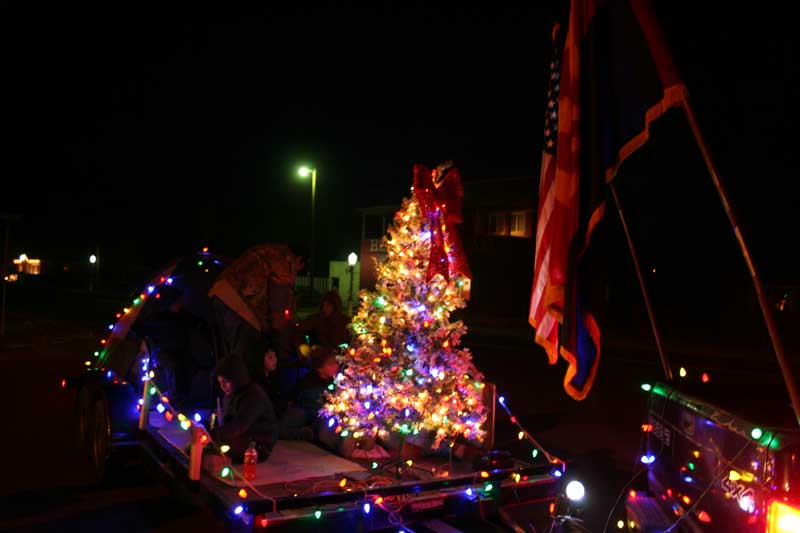 Photo By Gualterio Casias: Boy Scout Troop 5031 of Arizona and Troop 5024 of New Mexico lead the Parade of Lights at the 12th annual Duncan Festival of Lights on Dec. 9 in Duncan. The Boy Scouts’ float carried Christmas cheer along with a strong display of patriotism. The parade’s theme was “An Arizona Christmas.”

All in all Arizona Scout Troop 5031 and New Mexico Troop 5024 led the parade with plenty of Christmas cheer and symbols of patriotism. The float proudly displayed the American and Arizona flags. The Scouts received hearty cheers and applause as they led the way down U.S. Highway 70 (Old West Trail).

“The boys really worked their hearts out and it showed,” said Greenlee County Supervisor Richard Lunt, who represents the Duncan area. “They took a great deal of pride in leading the parade, showing their pride in community as well as really bringing something special to Duncan’s Christmas spirit. That and they showed a  strong patriotism.” 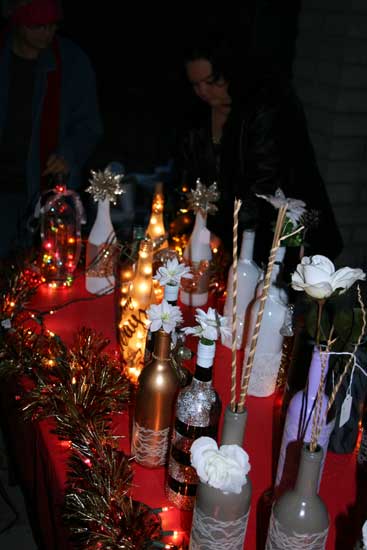 Photo By Gualterio Casias: Jessica RomerRomeo o displays a large array of empty wine bottles she has decorated with several themes, ranging from one topped with a football, flowers, and Christmas holiday themes. It was the most holiday decorated vendor booth at Duncan’s Centennial Park at the Dec. 9 Duncan Festival of Lights. Viola, Michael and Judy Andazola enjoyed visiting with Romero and admired her unique, delightful work.

There were a dozen floats, each in their own way conveying the parade’s theme “An Arizona Christmas” in the 12th annual Festival of Lights holiday sponsored by the town of Duncan. Each float blazed with multi-colored lights, strongly conveying the Christmas holiday spirit. Each parade entry was quite unique. The real attention grabber was the Martin Neave family’s Snoopy and the Red Baron. The Neaves are from Lordsburg, N.M., about 32 miles from Duncan.

The Baron’s blood-red Fokker bi-plane was as large as the real thing. In front of the World War I vintage airplane was Snoopy at the throttle of his Sopwith Camel (Snoopy’s doghouse).

Neave made the Fokker from scratch. It was constructed from real wood. Snoopy’s version of an airplane was less elaborate. The valiant pooch was represented by a poster of him attached to the top of the doghouse. Neave said he had planned to make a wooden cutout of Snoopy but he ran out of time. The Red Baron and Snoopy appeared in Lordsburg’s Christmas festival held the previous week.

It should come as no surprise that parade judges named the Neave float as the Most Original entry.

There were two other quite glamorous entries from Lordsburg. One was the Lordsburg Police Department’s depiction of a small brick home that gave the impression of being warm and cozy inside. In front of the house were elves playing in the snow.

The Hill family of Lordsburg had a very brightly lit entry that depicted a snowy landscape and the desert. It had large snowflakes and a saguaro cactus. Mom Marsha Hill, who rode in the parade, is director of the Lordsburg-Hidalgo County Chamber of Commerce.

Greenlee County’s Rodeo Royalty was well represented as was the Duncan Valley Electric Cooperative. The Co-op is key to the well-being of Duncan and most of southern Greenlee County, including Sheldon, Verde Lee, and Loma Linda. It provides electrical power to all of those communities. The co-op is membership-owned, meaning customers own it.

Earlier in the day at Centennial Park, Ruth Johnson, Lori Bellamy, and Nancy Waits manned a booth accepting donations for the U.S. Marine Corps Toys for Tots program. Donation ranging from 50 cents to a dollar, $5 or more were graciously welcomed. In exchange, donors could select multi-colored “candy canes.” The items were flexible and could be bent into any shape.

Jessica Romero had very unique offerings at her booth. They were empty wine bottles decorated with a great variety of themes. One bottle had a miniature football on it. Others had flowers or other lively, spirited items protruding from the bottles.

Judging by the crowd lining the parade route and the applause, cheers, and whistles, the parade was a definite success.

Town of Duncan Administrative Assistant Isabel Blancarte summed it up saying the festival’s success was definitely the result of a community effort.

“We definitely could not have done it without the dedication of the community,” she said. “A special thanks to all who participated in the events at the park and in the parade and to the public for attending what was certainly a ‘small town’ Christmas celebration.  It’s so magnificent to see the support our community shares with this joyous season.”

“Personally, I am honored and humbled to be a part of this remarkable community.”