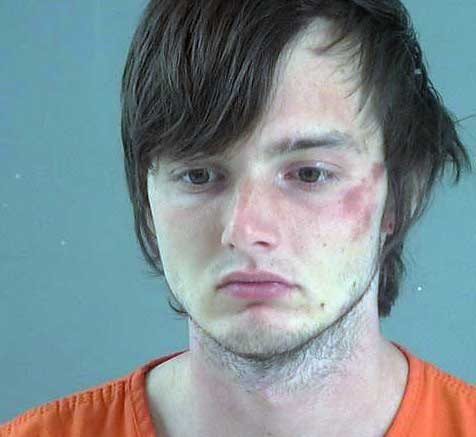 Contributed Photo/Courtesy GCSO: Jon Langley, 20, was booked into jail for disorderly conduct after allegedly becoming irate while drunkenly shopping with his dog.

SAFFORD – An intoxicated man was arrested and booked into the Graham County Jail on Saturday after he allegedly became upset when another person questioned the validity of his dog being a service animal.

Officers were dispatched to Walmart at 755 S. 20th Ave. at about 6:12 p.m. regarding an unwanted subject.

A man, later identified as Jon Russell Langley, 20, of Pima, was inside the store holding his dog when a person asked him to show paperwork signifying the dog as a service animal. Langley then threatened an employee and went “haywire” according to the employee’s statement to police.

By the time authorities arrived, Langley was in the parking lot but, after noticing an officer, attempted to return to the store. An officer noted Langley appeared to be intoxicated and that he was unsteady on his feet.

Officers then fitted Langley in a hobble restraint and placed him in a patrol vehicle. While an officer continued to interview witnesses, he was interrupted by Langley banging his head on the interior cage of the patrol vehicle.

Langley was then transported to the Graham County Jail, were he continued his belligerent behavior by spitting at officers and allegedly yelling, “I hope all your (expletive deleted) families die.”

After that, he was placed in a restraint chair with a spit hood to enable paramedics from Southwest Ambulance to assess his condition.

After being medically cleared, Langley was booked into the jail on a count of disorderly conduct.

A Safford Animal Control officer took possession of Langley’s dog at the Safford Police Department and transported it to the Graham County Animal Shelter.