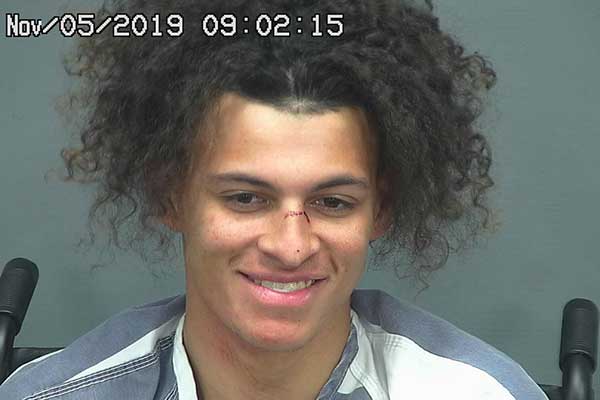 On Tuesday, November 5, 2019, at approximately 12:30 a.m., two Safford police officers in the parking lot near the Safford High School baseball fields heard what sounded like an automobile collision. A short time later the officers heard the sound of a vehicle revving its engine as if it was accelerating. Soon, a maroon Dodge Challenger drove past them traveling south on 20th Avenue at an accelerated rate of speed. As the vehicle passed it sounded as though something was dragging underneath the car.

Both officers attempted to catch up to the vehicle, which was driving upwards of 70 miles per hour. One of the officers was reportedly traveling 60 MPH in pursuit of the vehicle and it was still pulling further ahead. The vehicle turned west on Golf Course Road and continued driving at a high speed. Sparks were coming from the underside of the vehicle as it dragged a broken part along the pavement.

An officer caught up to the vehicle at the round about in Daley Estates and activated his emergency lights. The driver of the Challenger pulled to the side of the road as if he was stopping, then accelerated to a high rate of speed toward the Mount Graham Golf Course parking lot. The vehicle drove straight into a short stone and concrete wall. Upon impact, the rear end of the vehicle was raised straight up to a nearly vertical position before landing back on the ground.

The officer drew his pistol and pointed it at the vehicle as he approached. The driver and passenger both bailed out of the vehicle and ran. The first officer on the scene pursued the passenger, while other officers arrived and went after the driver. As the officer closed the distance between himself and the passenger, he drew his taser and ordered the passenger to stop. The passenger stopped running and was ordered to the ground. He was handcuffed and escorted back to the parking lot. He said the his left shoulder was injured in the collision.

Another officer pursued the driver onto the golf course and caught up to him at the tree line. As the driver circled around a tree, the officer caught up to him and brought his right arm around the driver’s neck and placed him in a choke hold and took him to the ground. The officer managed to roll him over on his stomach and get his hands behind his back. The man tried to pull free so the officer put him in a choke hold again. The man continued to struggle before collapsing back onto his stomach. The officer asked him if he was done. The man continued to struggle for another minute or so, then asked the officer to let go of the handcuffs because they were tight. The man finally complied with the officers instructions and was handcuffed.

While walking the man back to the police vehicles, the officer asked a deputy to take the man the rest of the way so the Safford officer could pick up some things he had dropped. The man slipped from the officer’s grasp and took off running, handcuffed, onto the golf course. Five officers pursued the man and he eventually tripped and ended up with multiple officers on top of him. He had to be picked up and forced into the back of an officer’s patrol vehicle, which had pulled up to the area where the man was running.

The driver refused to tell police his name. He told them to run the plate on his vehicle. A records check on the Dodge Challenger showed the car was registered to Paul Still. A Motor Vehicle Department photo confirmed that Still was the driver of the vehicle. According to the police report, Still smelled of alcohol and his eyes were bloodshot and watery.

The passenger told authorities that he wanted to cooperate. He said that he and Still had been drinking earlier in Morenci. The two men drove to Safford and continued drinking. The man said that they had been involved in a collision earlier but he was unsure of the location of the accident. He said that he and Still made contact with the occupants of the other vehicle before leaving the area. He said that when they became aware that the police were behind them, Still told him that he was going to try to get away. After the vehicle hit the stone wall, Still apparently told the passenger to run. The passenger was released and the vehicle was towed from the scene.

Still was transported to the Safford Police Station where he was questioned about his activities. He told the officers that he had been drinking outside JD’s Grill House and that the earlier accident occurred on the road near Walmart. Still submitted to a blood draw to determine his level of intoxication. While conducting an inventory of the vehicle, officers found a 12-pack of Dos Equis on the front passenger side floorboard. They also found an open bottle of Jack Daniel’s Honey Liquor.

Still was transported to the Graham County Jail and booked for Unlawful Flight from Law Enforcement.