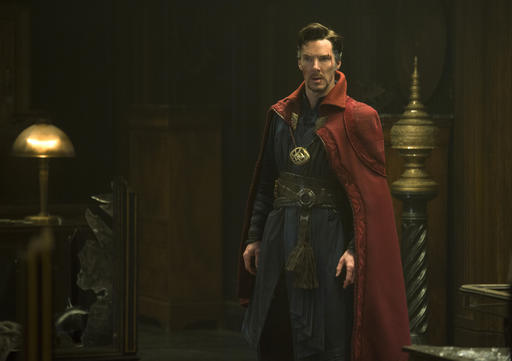 This image released by Disney shows Benedict Cumberbatch in a scene from Marvel's "Doctor Strange." ( Jay Maidment/Disney/Marvel via AP)

LOS ANGELES (AP) — A strong batch of new films drew audiences to the theaters in large numbers this weekend, including Marvel’s “Doctor Strange,” the animated “Trolls” and Mel Gibson’s WWII drama “Hacksaw Ridge,” effectively waking up the sleepy fall box office. The top three films all garnered largely positive reviews from critics and all recorded A CinemaScores from opening weekend audiences too.

It’s the fourteenth film in the Marvel Cinematic Universe and the fourteenth to open at No. 1. As one of the lesser-known properties, it far-surpassed “Ant-Man’s” $57.2 million launch, but fell a little short of “Guardians of the Galaxy’s” $94.3 million debut.

Much of the “Doctor Strange” business came from premium large format screens and 3D showings, which, according to RealD, made up 47 percent of the domestic gross.

“Movie theaters exist for a movie like ‘Doctor Strange,'” said Dave Hollis, the executive vice president of distribution for The Walt Disney Company.

“Yes, for a marketing tagline the idea that it’s something that you haven’t seen before is a great way to sell something, but having something that arrests and totally disrupts what people are expecting to see inside of a movie theater is part of what will help jump start what has been a bit of a slower box office lately which is good not only for us but for the entire marketplace,” Hollis said.

The weekend also drove The Walt Disney Studios to surpass the $6 billion mark globally — a first for the studio and a second for the industry.

Disney wasn’t the only one celebrating, though. DreamWorks Animation’s “Trolls,” a family-friendly musical featuring the voices of Anna Kendrick and Justin Timberlake, took second place with $45.6 million in North America, and $30 million internationally. In addition to being one of the first new family films to hit the market in a few weeks, the film also had the added benefit of an original hit song from Timberlake, “Can’t Stop the Feeling.”

And in third place, “Hacksaw Ridge,” Gibson’s film about the true story of the conscientious objector Desmond Doss’s (Andrew Garfield) heroics during the battle of Okinawa, earned $14.8 million. The independently financed film cost a reported $40 million to make.

“It’s a real return to form for Mel Gibson who has obviously had his ups and downs in his personal life, but it is a true meritocracy in this business,” noted Paul Dergarabedian, senior media analyst for box office tracker comScore. “If you make a really great movie, people will judge you based on that movie.”

Gibson hasn’t directed a film since “Apocalypto” in 2006.

Holdovers populated spots four and five. “Tyler Perry’s Boo! A Madea Halloween,” dropped 55% in its third weekend in theaters. It made $7.8 million, bringing its total earnings to $65 million.

Perry also managed to beat out “Inferno” again, which brought in only $6.3 million in weekend two to take fifth place. The Tom Hanks-starrer has grossed $26.1 million to date.

In limited release, the likely awards film “Loving,” about the true story of the couple behind the Supreme Court decision that invalidated laws against interracial marriage, also opened in four theaters to $169,000.

Overall the box office is up around 16 percent from this weekend last year, which Dergarabedian says is attributable to the quality of the new films, audiences’ desire for some escapism before the election on Tuesday and the diversity of content. The top three films all had different ratings too, “Doctor Strange” is PG-13, “Trolls” is PG and “Hacksaw Ridge” is rated R.

“This is the formula that Hollywood should try to recreate every weekend,” Dergarabedian said.