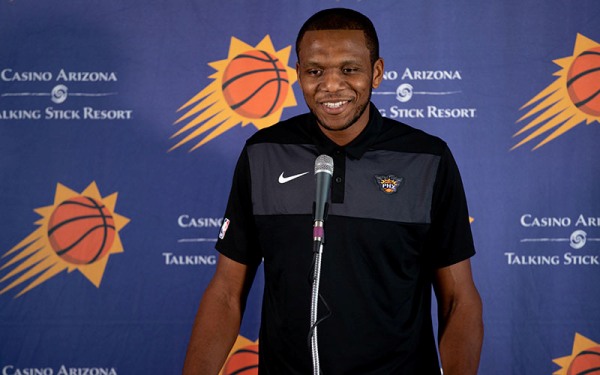 James Jones, vice president of basketball operations, is optimistic about the Phoenix Suns, despite the team firing its general manager just days before the start of the 2018-19 season. (Photo by Justin Parham/Cronkite News)

PHOENIX – Still in the preseason and on the cusp of what is hoped to be a vastly improved season, the Phoenix Suns are faced with their first taste of adversity.

On Monday, the Suns fired General Manager Ryan McDonough, leaving a void in their front office with the start of the 2018-19 NBA season just days away.

Despite the recent management upheaval, Vice President of Basketball Operations James Jones spoke optimistically Friday about the team’s outlook entering the start of the regular season, as well as his new interim position with the team.

“The timing to make moves like this, there’s never a perfect time,” Jones said about the decision to part ways with McDonough so close to the start of the season. “The timing isn’t an issue. For us it’s, ‘What’s next?’”

“What’s next” could include the addition of veteran free agent guard Jamal Crawford, who was at Talking Stick Resort Arena on Friday and spoke with the team.

Crawford has played 19 seasons in the NBA, most recently with Minnesota.

Jones and Assistant GM Trevor Bukstein have been placed in charge of general manager duties in the wake of McDonough’s absence, with Jones being in charge of basketball operations and Bukstein as the main contact for player transactions, according to a statement released by the Suns.

“We’re a good tandem,” Jones said of his relationship with Bukstein. “We both know each other’s strengths and we respect each other’s weaknesses.”

McDonough spent the past five seasons as general manager of the Suns, rebuilding their roster to its current mix of young and veteran players but suffering through several losing seasons in the process. He talked at media day about the team having its framework in place to be what he hoped would be the league’s most improved team this season.

The Suns hired McDonough in 2013 and he served as the team’s general manager for five seasons. McDonough signed a three-year contract extension with the Suns in the summer of 2017 that would keep him under contract through the 2019-20 season.

Jones appears to be a leading candidate to fill the Suns’ full-time general manager position.

Jones avoided directly mentioning the potential for him to take over that job, and instead emphasized his desire to continue his career in basketball and to help the Suns however he can.

“I’ve always thought more about the entire game. I have a deep appreciation for the NBA game,” Jones said. “It’s an industry. The basketball industry is something that fascinates me. And I’m just focused on being able to be a part of an organization that can do special things for the city.”

Looking ahead to the Suns’ season-opener on Wednesday, Jones gave his takeaways from the limited game action the Suns played in the preseason, and specifically, the progress of rookie Deandre Ayton.

“Deandre’s been performing extremely well,” Jones said. “I would argue and say that he’s probably been the best player in the preseason. Specifically for us, but league-wide.”

Jones also praised first-year head coach Igor Kokoskov for his patience and persistence in implementing his system on a new and young team.

“We’ve had some ups and downs with a young roster,” Jones said. “Shuffling the point guards, shuffling the wings, and all these (lineup) combinations. Doing that while still trying to install a playbook that probably has 150 plays, and not losing his cool, that’s been impressive to me.”

The Suns are still without a definitive starting point guard, but in lieu of any alternatives, are content with the guard rotation in place.

“Coach Igor is adamant that we have enough playmakers to figure it out,” Jones said. “We’ll continue to look to improve and strengthen our team, but right now, we like our young guys.”

It is unclear how the Suns will handle their general manager vacancy, or what their timetable for a decision is. Regardless of his position with the team or rank within the organization, Jones is committed to doing what he can for the best of the Suns franchise.

“I’m still interested in helping this organization in whatever way possible,” Jones said. “Titles don’t mean anything to me. The only title that matters is an NBA title.

“If that means I can help this team in my current role or another role, I’m all for it. But, I don’t lose sight of the ultimate goal.”

Justin Parham contributed to this report.