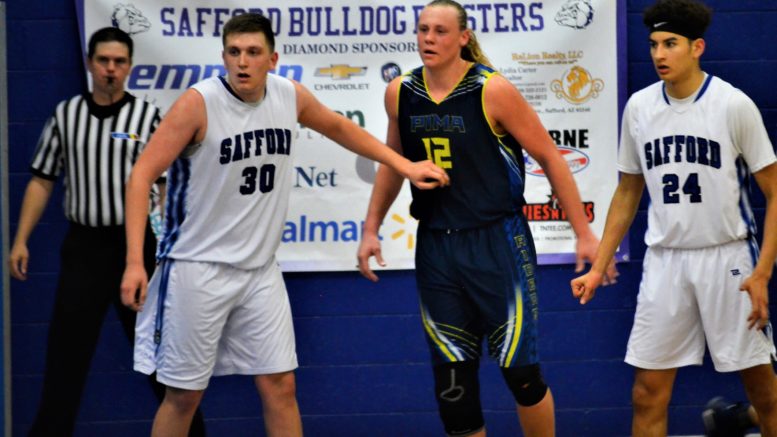 With 5 minutes to play in the first half Pima Coach Cliff Thompson saw his team down 14 points on the road at Safford. He called a timeout and pleaded with his team to play defense. They took his pleas to heart and fought back to trail 29-25 at halftime.

The 2nd half was a hard fought battle. Pima used the inside presence of 6’4″ Dawson Pruszynksi as they fed him in the post to take their first lead. Safford countered with motion offense in the lane and openings from behind the arc.

Each team was assessed a technical foul in the 2nd half but cooler heads prevailed both teams battled until the end. Pima held on for the 59-51 win.

Safford was paced by guard Dom Gutierrez as he put up 13 points. He used his speed and slashing ability to continually get in the paint for layups and leaners.

Pima was lead by Pruszynski and Alec Judd who each had 15 points for the Riders.

The Riders move their record to 13-10 overall. They have games vs Willcox and Thatcher remaining before the 2A East Conference Tournament starts.

Safford falls to 14-8 on the season. They still have 6 regular season games left. The 3A South won’t play a conference tournament.