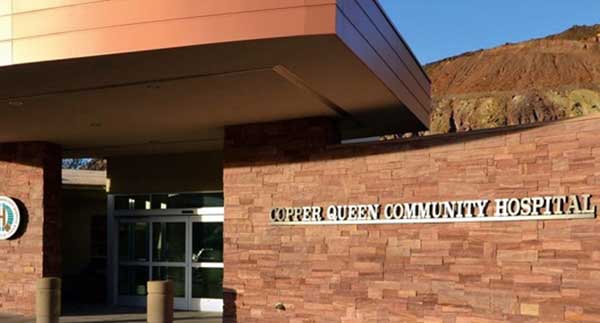 The Copper Queen Community Hospital, in the mining town of Bisbee in Cochise County, is one of dozens of health-care facilities that serve residents of rural Arizona. (Copper Queen Hospital)

Epidemiologists say some rural regions of the state haven’t fully recovered from the first wave and could be hit much harder a second time around. Dr. Daniel Derksen, director of the Center for Rural Health at the University of Arizona, said four rural Arizona counties have had double the per-capita number of coronavirus infections and deaths of the state’s urban areas.

“Often, the rural health infrastructure isn’t geared up to take care of folks who require higher-level care,” Derksen said. “That’s where we saw a lot of the difficulty, was the number of people admitted exceeded the capacity; they had to create extra inpatient beds.”

Derksen said Arizona’s rural hospitals and clinics often are forced to transfer their most critical COVID patients to facilities in Flagstaff, metro Phoenix or Tucson. But if cases spike again, urban hospitals may not have the capacity to handle the extra load.

And while dramatic infection and mortality rates were seen in Navajo and Apache counties, which are part of the sprawling Navajo Nation, Derksen noted other regions of the state were hit just as hard.

Derksen said during the pandemic, Arizona’s rural health-care system has turned to telemedicine to stretch its staff and resources and close the often vast distances between patients and providers.

“That’s how a lot of the rural and critical-access hospitals – the rural health clinics, the federally qualified health centers and the private practices in Arizona – have really gotten by, by being quite innovative about how to do visits differently,” he said.

A major obstacle to virtual visits, according to Derksen, is the “digital divide” in the state’s rural areas. He said it’s shown the need for state and federal officials to invest heavily in developing the broadband infrastructure to allow delivery of health services to more rural Arizonans.