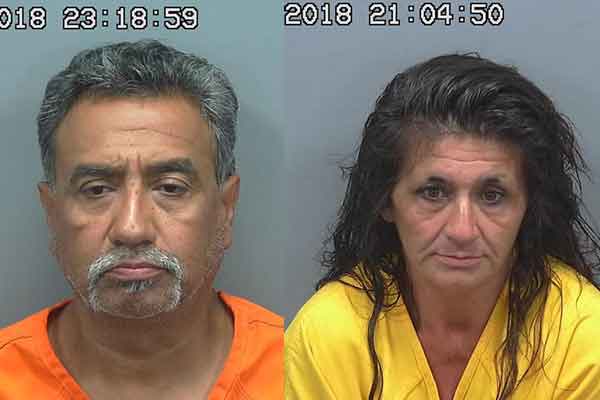 SAFFORD – Saturday night police were dispatched to Firth Park in reference to a male reported to be in the woman’s restroom and refusing to leave.

However, when an officer arrived there was not a man in the female’s restroom but a woman in the male’s restroom hovering over the urinal next to a man. The officer instantly recognized the couple, Michelle and Henry Guerroro, through prior police contact. Michelle was asked what she was doing in the men’s restroom and why they were standing together. The officer could see that Henry was not using the restroom, but starting to grab items off the top of the urinal. As the officer got closer, he could see multiple syringes and other items recognized as drug paraphernalia. Henry was taken into custody. Meanwhile, Michelle was starting to make her way to the exit door but was instructed to stop and another officer that arrived to the scene took her into custody as well.

Henry stated to authorities the substance in the syringes was heroin and it belonged to him. He reported that he uses heroin for pain and during a pat search, additional syringes were located with residue inside, along with a prescription pill that he stated was a muscle relaxer.

Michelle reportedly told authorities that the substance wasn’t hers but she intended to use it to get high. The officer noticed a fresh, bleeding tract mark on her arm.

Due to both of them being within reaching distance of the substance, and claiming ownership and/or intent for use, Michelle and Henry were transported and booked in the Graham County Jail.