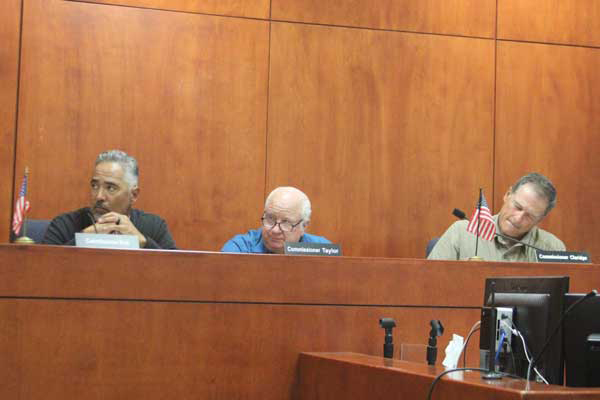 SAFFORD — Before members of the Graham County Planning and Zoning Commission could debate the issue amongst themselves, Commissioner Mark Claridge successfully moved to delay any action on a proposed change to county zoning regulations when it comes to growing marijuana.

During Wednesday’s meeting, Claridge said he needed more time to study the issue.

Timothy Lasota, speaking on behalf of Pamela Brooks, who owns property in Geronimo, made a presentation to the commission proposing a text amendment, to remove growing marijuana from the mixed use industrial zone (MX) and, instead, place it in the Agriculture Zone (A) with conditions applied or under a conditional use permit.

“As to cultivation, it’s going to take the wind out of these spot zoning cases,” he said. “It wouldn’t be necessary to try re-zone to a use that, frankly, doesn’t make a ton of sense.”

The proposed change would modify the definition of enclosed area under marijuana regulations, limiting the property on which an enclosed grow operates to no more than 300 acres, and the enclosed area used for growing not to exceed 50 percent of that acreage.

It would also mandate that hoop houses, high houses, cold frames and other portable and semi-portable structures do not qualify as an enclosed structure.

The change calls to modify the distance requirements between residentially-zoned property and marijuana grows, from the exterior wall of the enclosed grow to the lot line of the protected area.

No one spoke in opposition to the proposed change to the county’s zoning codes, while two spoke in favor — Graham County Chamber of Commerce Executive Director Vance Bryce and Double R Communications Owner Reed Richins.

Bryce said the current requirement to re-zone property to grow an agricultural product creates a regulatory burden on businesses.

“Let’s get on the same page, and be a friendly regulatory community in which businesses are excited to create jobs and invest,” Bryce said.

Following the public comment, the commission voted unanimously to postpone further debate and possible action to its next meeting, Oct. 19, at 9 a.m.