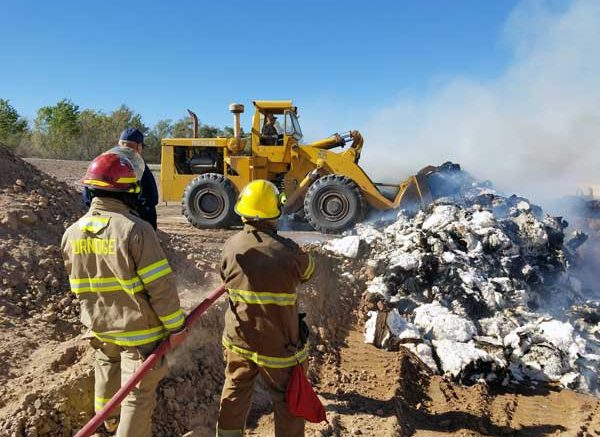 Contributed Photo/Courtesy Adam Hoopes: Pima firefighters spray down bales of cotton while a gin employee pushes them into a hole. Roughly 80 bales of mote cotton caught fire Saturday at the Glenbar Gin.

PIMA – Just one spark was all it took to set roughly 80 bales of cotton ablaze at the Glenbar Gin on the western outskirts of Pima on Saturday.

Authorities and firefighters were dispatched to the gin at 9845 W. U.S. Highway 70 at about 10:28 a.m. regarding the fire. The Pima Fire Department and Thatcher Fire Department both responded to minimize the risk of the flames spreading.

Pima firefighters doused the coal-like bales with water as gin employees dug a hole and then buried the still-smoldering cotton.

According to Glenbar Gin General Manager Gene Seale, the bales that caught fire were mote bales, which is a by-product of the cotton ginning process used to make lower-grade fiber products, including stuffing for couches and mattresses.

“When you gin the cotton, there are fibers that are too short that come off with the seed and everything,” Seale said. “It’s not a high-quality cotton and you only get about 12 cents per pound for it where as regular cotton goes for about 75 cents (per pound).” 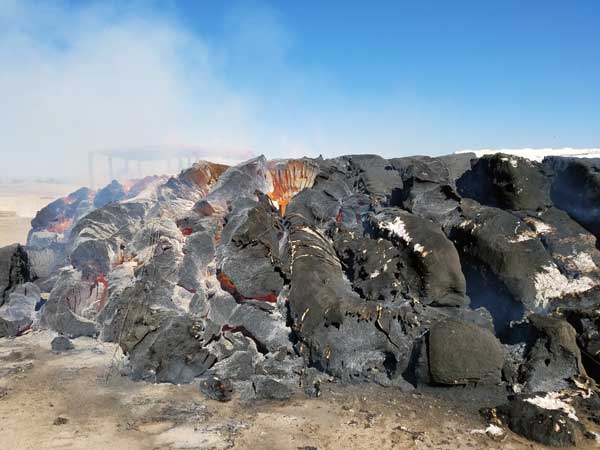 Contributed Photo/Courtesy Adam Hoopes: Bales of cotton turn into coals during a fire at the Glenbar Gin.

While the amount of damaged mote cotton may seem high, Seale said the gin normally gets about 14 bales of regular cotton per each cotton module. The modules are the pressed blocks of cotton which are either tarped or wrapped in plastic prior to delivery to the gin. While the price varies, each cotton module is worth around $7,000 to $8,500 for the highly sought after Pima cotton, also known as extra long staple cotton. Pima cotton is considered to be a superior brand of cotton and is very durable and absorbent. It is named after the Pima Indians, who first cultivated it in the United States, but its true cultivation origin is in Peru. Glenbar Gin takes both the more common upland cotton and Pima cotton.

Unlike the regular cotton bales, the mote bales are left out in the open, unprotected from the elements.

While the cause of the fire is unknown, Seale believes a fiber could have been ignited by some welding that was taking place about 100 yards away from the bales. He said the wind was blowing so hard that it could have easily carried a burning ember over to where the mote bales were being stored.

“When we’re ginning there’s little bits of cotton pretty much everywhere,” Seale said. “I’m kind of thinking it might have been the welding, but there’s no way to know for sure. It wasn’t arson or anything like that. It was just some kind of a freak thing.”

Seale listed the total damage of the lost mote cotton bales between $6,000 to $7,000 and that it would be covered under the gin’s insurance policy. He added that if the wind had been blowing the opposite way, the damage could have been much worse because that would have been toward where the cotton modules are stored prior to being processed. 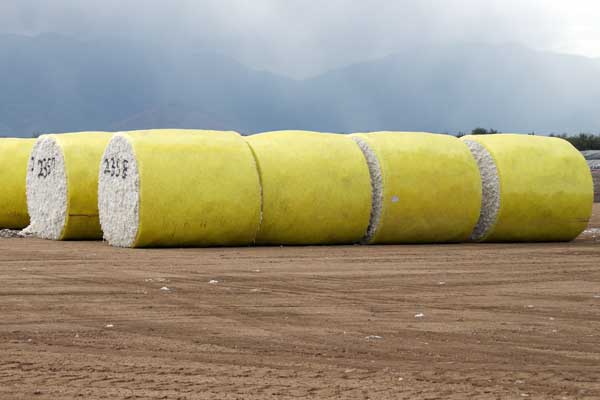