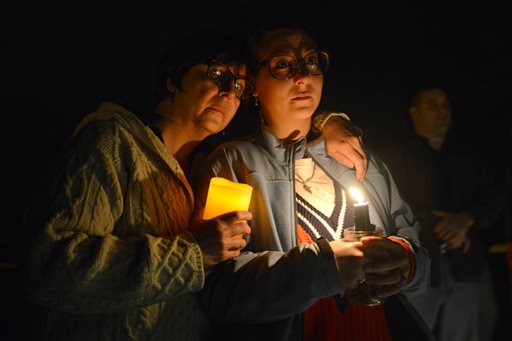 NEW HARTFORD, N.Y. (AP) — The latest on the fatal beating of a 19-year-old and serious injury of his brother inside a church (all times local):

A teenager says a beating in an upstate New York church that seriously injured him and killed his brother began because they “didn’t want to answer” questions during a meeting.

Seventeen-year-old Christopher Leonard testified at a court hearing Wednesday about the encounter last week at the Word of Life Christian Church in New Hartford.

Christopher said his parents, his sister and three other congregants punched him and whipped him with an electrical cord. He said he was eventually taken to another room and left sitting in a corner with earplugs and earmuffs, so he couldn’t hear conversation around him.

He says he later was brought back into the church sanctuary and saw his 19-year-old brother, Lucas, lying on the ground and not breathing.

All six suspects have pleaded not guilty.

A teenager who authorities say was severely beaten by relatives in an upstate New York church has steadfastly avoided looking at his sister as he walked into court to testify against her.

Seventeen-year-old Christopher Leonard came to court in New Hartford for a hearing Wednesday in the assault case against Sarah Ferguson.

She didn’t look up from the defense table as her brother arrived. Earlier, officials rearranged the small courtroom’s defense and prosecution tables so Leonard would be a bit farther away from his sister while he was on the witness stand.

Ferguson, the teens’ parents and three other defendants have pleaded not guilty.

The uncle of two teenage brothers who were brutally beaten in an upstate New York church says its leaders kept them estranged from relatives who weren’t members.

Jimmy Stewart went to a New Hartford court Wednesday for a hearing in the case. His 17-year-old nephew, Christopher Leonard, survived the attack this month, but 19-year-old Lucas Leonard died.

Christopher Leonard is expected to testify against one of the suspects, his sister, Sarah Ferguson.

She has pleaded not guilty. So have five other defendants, including the victims’ parents.

Stewart says he and his wife attended Word of Life Christian Church in the 1990s but never joined because they felt “something wasn’t right.”

He says the church’s pastors then forbade the Leonard children from associating with his family because they weren’t church members.