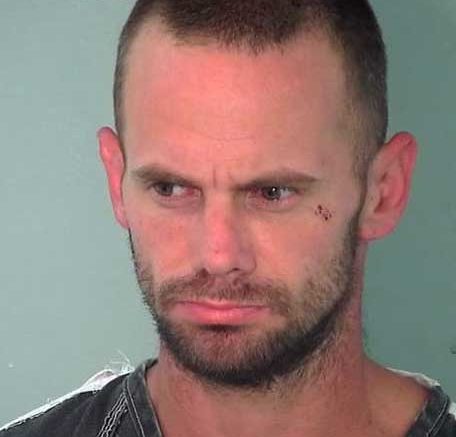 SAFFORD – On Friday, Safford police responded to a call in the Entertainment Avenue area where three witnesses reported that they were riding bicycles in the area, when they came to a stop to look for available hotel rooms on their cell phones. One of the witnesses stated that a man and woman approached them, that the man was “mumbling” and “talking to himself.” The second witness said that the man approached them closely and raised his shirt, brandishing a large blade in a sheath and the witness feared for his safety.

A short time later, police found the man matching the description that they were given, who was identified as Jerry Morris. The investigator approached Morris and asked him if he was in possession of a knife and he said that he was.  The 11 inch knife was removed and placed on the hood of the patrol vehicle.  Morris was asked if he had raised his shirt to brandish the weapon to people riding on bikes and he said that he did, but not to threaten anyone. He only did to show it, because he thought it was nice and new.

The witnesses were brought by another officer to positively identify Morris as the man who brandished the knife and advised the officers that they would like to pursue charges. After being read his rights, Morris told officers that he used the knife for protection. He was asked if he was a convicted felon or a prohibited possessor to which he answered, “I think so.” Morris was placed into the officer’s vehicle and advised he was under arrest for Disorderly Conduct with a weapon. Officers were provided with a full criminal background of Morris and advised that he was a convicted felon with multiple felonies.  Morris was transported and booked into the Graham County Jail.