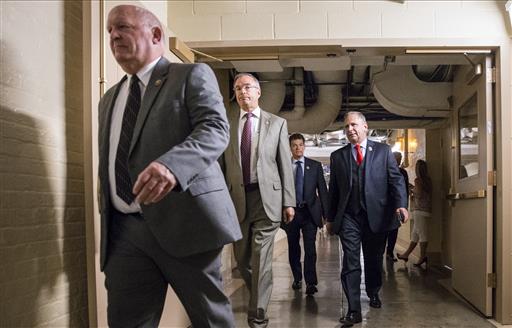 WASHINGTON (AP) — Congress is expected to exit Washington for a months-long recess with no action on gun control, despite mass shootings in recent weeks and uproar from Democrats who have pushed for new legislation. Efforts to fund the fight against the Zika virus have also stalled, threatening the speedy development of a vaccine to protect women and their babies from Zika.

House Republican leaders tried last week to move legislation that would let federal authorities block gun sales to suspected terrorists, but only if they could prove in court within three days that the suspect was planning to engage in terrorism. It went nowhere as conservatives said it was too restrictive on firearms and too lax on battling extremism. Democrats also opposed the bill, saying it would be ineffective.

Republicans said Tuesday that no votes are expected this week before Congress adjourns for seven weeks until September. Emerging from a morning caucus meeting, Rep. Bill Flores, R-Texas, suggested that instead of legislating on the gun issue, GOP leaders think that more talk is needed.

“The action is to go back to our communities and have a candid conversation about the challenges we face as a country,” Flores said, adding that “there’s no need for us to try to cram a majority position down at this point.”

House Speaker Paul Ryan, R-Wis., said Republicans want “to have a good conversation where we calm things down” after the shootings in Orlando and another mass shooting last week in Dallas that targeted police officers. He said they want to find ways to improve relations between communities and police.

In the Senate, several gun control measures were blocked or stalled in June amid partisan disagreement. One of those bills was a compromise offered by moderates from both parties that would prohibit guns from a modest list of terror suspects.

Senate Democrats, meanwhile, were repelled in a last-gasp effort to revive a $1.1 billion effort to combat the Zika virus, which has run aground largely over GOP-drafted provisions to block Planned Parenthood from receiving money under the measure.

President Barack Obama made a $1.9 billion emergency request in February, but Congress has moved slowly in response.

A Senate Democratic aide said Minority Leader Harry Reid, D-Nev., broached a compromise with Majority Leader Mitch McConnell, R-Ky., to separate the Zika issue from a veterans funding bill, strip away the Planned Parenthood-related provision, and dump a provision that would ease rules on pesticide spraying.

In exchange, Democrats would have accepted a modest package of spending cuts to help defray the cost of the measure.

McConnell, however, dismissed the offer, refusing to disavow the House GOP position on denying new money to Planned Parenthood.

“This is a crisis,” McConnell said Tuesday. “Our friends across the aisle will have to decide if they feel the same or if a partisan political group is worth delaying funding to protect families from Zika.”

An infection by the Zika virus can cause grave birth defects.

Meanwhile, Republicans said that because the administration has been slow to disburse almost $600 million in already available anti-Zika funds, the failure of Congress to act before recessing until after Labor Day won’t have major impacts.

“They’ve got plenty of money that’s available,” said House Appropriations Committee Chairman Hal Rogers, R-Ky. “While we try to sort through ourselves up here, that money’s there.”

But the Department of Health and Human Services says that failure to act on Zika funds now would slow development and testing of a vaccine. The agency also claims the delay will hamper efforts to document the effects of Zika on pregnant women and their children, and potentially weaken efforts to kill the mosquitoes that can transmit Zika.