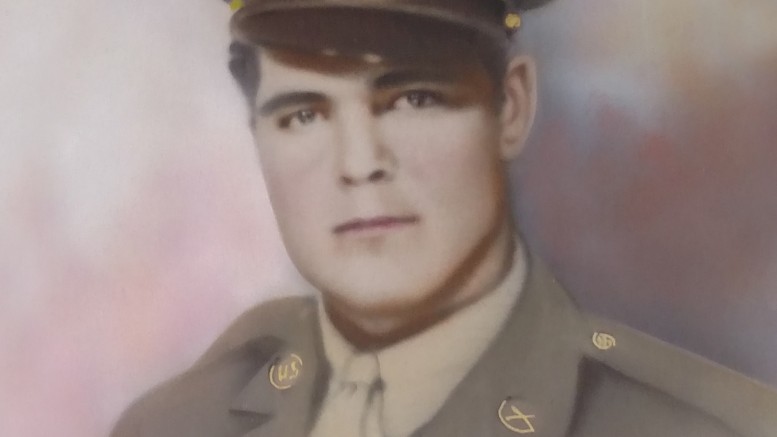 A Mass of Christian Burial for Clive Garcia Sr., age 92 of Safford, was celebrated Friday, November, 20, 2015, at 10:00 a.m., at the St Rose of Lima Catholic Church by Rev. Robert Rodriguez and concelebrated with Rev. Clement Agamba. The Rosary was recited at 9:00 a.m. by Deacon Carl Vessels. Grave site blessing and interment officiated by Rev. Clement and Deacon Rick Valencia both from Our Lady of Lourdes Parish, Benson, AZ.

We can trace Dad’s lineage back several generations, to the year 1838 when Patrick Henry Kellie, who was born in Cork, County Cork Ireland, immigrated to the US during the famous potato famine with his mother. When he stepped off the ship from Ireland, he was drafted into the Army and sent west to fight the Indians. His mother is buried in Socorro, NM. Patrick later married Maria Felicita Baca (Fajardo) in 1894 in NM. Felicita was born in 1840 in Val Verde, near Socorro. They had 10 children; Lorenza, Tomasita, Mariana, Sara, John, James, William, Ellen, Emma Mae and Rose.

Dad was baptized the 26th, October, 1923, according to the Rite of the Roman Catholic Church at the Church of Santo Nino, in Aragon, NM.

Dad loved playing the harmonica and guitar; as a young man he played in a band called the “Sugar Stompers.” He’d tell stories of riding his white mule to the various honky tonks in the area of Alma, Glenwood and Gila.

Dad’s favorite sport was basketball. His grade school teacher would pile the team into the back of his pickup and drive them to their games, in the winter to places as far away as Socorro and Silver City. He loved the game and would always watch the Phoenix Suns on TV. His favorite player was Steve Nash.

While disembarking off landing craft in Arawe, New Britain he ran into his cousin Raymond Ulibarri.

Soon after Raymond requested and was transferred into the ‘BUSHMASTERS’ 158th Regiment Combat Team, Co. K, heavy weapons, Dad was in Company G and then onto Noemfoor Island, New Guinea and the Philippines and many other landings on various unnamed islands. Dad and Raymond became close and would check on one another after each engagement with the enemy.

On Feb 1~2, 1945, during the liberation of Luzon Island, Golf of Legaspi, Philippines. Dad’s Co. Company ‘G’ was ordered to silence two Japanese 14” guns. In the process of getting to the two guns Company G destroyed 164 of the enemy, fought through thick underbrush, bamboo thickets, tank traps, wire, mines and were under constant mortar, machine gun and rifle fire at all times. Company G sustained one wounded casualty.

For this action Company G was awarded the Presidential Unit Citation and Bronze Star.

On 1 & 2 April 1945 (Easter Sunday weekend) while engaged with the enemy during the liberation of Luzon, in the Gulf of Legaspi, Philippines, after repelling multiple bonsai attacks.  Raymond was killed in action. He is buried in the American Military Cemetery, in Legaspi, Philippines.

Dad went on and was part of the Japan occupation force.

Once back home state side. Dad heard, while passing through Safford on his way back to Alma NM, that there was work in Morenci. He would say that his intent was to work for a pay check or two, then return to the ranch, but he remained in Morenci for the next 37 years.

While working on the track gang a rail was dropped and Dad was hurt and sent to the hospital. He hated hospitals. But then things got better for him while he was there. He meets our Mom, Julia Zepeda. She worked there as a Candy Striper. He asked her out to a dance. Oh how they both loved to dance! Dad had close quarter dancing moves. He would dip mom and they would dance check to check. Dancing was a huge social outlet for them. They married soon afterwards, on November 16, 1946.

Mom and Dad started a family with Clive Jr. their first born September 17, 1947, then Daniel, Martin, and Kathy followed.

Dad worked at the Morenci Open Pit, beginning on the track gang, and then getting what he would describe as the best possible job available. The Locomotive trains dump man.

Dad settled in and became a full time resident of Morenci, Az. He made friends easily.

While growing up in Morenci Dad taught us how to camp, fish and start a fire, he loved to fish, but would never eat them.

Later he explained why he didn’t like to eat the fish he caught. He said that during WW II, his squad, was loaded into a submarine and taken to an island by night and was ordered to destroy an antenna. They were given only so many days rations. They eliminated the enemy, destroyed the antenna, ate all the rations and then had to turn to what was available. That turned out to be the monkeys on the island. As the grandkids would later found out, he said they had the prettiest pink and blue eyes he’d ever seen and they tasted good. Once all the monkeys were gone, they turned to the sea. He got his fill of fish and anything that came from the water. They were finally retrieved by boat.

We kids were raised with a lot of freedom, to go camping, hiking, fishing, and shooting. So as we began to graduate from high school and Clive wanted to enlist in the Marine Corp, Dad and Mom didn’t stand in his way. 1966 we drove the San Diego MRD and watched Clive graduate again, this time as a Marine. Dad was proud that Clive was going to serve his country.

In November 1969 just after Thanksgiving, Dad stopped at Nacaratii’s service station at the traffic light to buy smokes, visit and shoot the breeze with whoever was there at the time. He was a social kind of guy. When he saw a military vehicle stop at the pumps and a Marine was asking for directions. They pointed towards the direction of our home. Dad didn’t know where they’re actual destination was, but had an urgency to get home quick. He got home told mom what he saw and they waited. It was a low I had never seen Dad or Mom at before. That’s when we met Captain L. E. Pistelli USMC and were informed of Clive’s death in South Vietnam, November 26, 1969.

The hole in Dad’s heart never healed and why should it?

There were weddings and grandchildren later and his love for the grandkids was noticeable. He couldn’t help, but show his unconditional love for each and every one of them. Even when the grand kids became adults and began raising families of their own; the great grand kids were shown the same special love.  Two of his great grandsons carry his name, Ishmael (Izzy) Clive Camacho and Mauricio Clive Garcia.

He loved playing poker with friends, at the casinos, with the grandkids and great grandkids.

Dad loved and cherished all the family reunions, in Glenwood NM.

He loved catching up with the family news, visiting, games, the outings, and just having a good time.

Mom and Dad were both involved in the VFW in Safford. Dad was Commander of Post 10385 for three different years. One of their highlights was when he was commander and they were driven by limousine from Safford to the NM state line and then escorted the Vietnam Moving Wall back into Safford for display and viewing.

Dad moved to Benson and lived with us for three and a half years. His last year was at Starfish Care Homes, an assisted living facility in Tucson.

He loved to cook his own food and doing it his way. We sacrificed a few pots and pans for the sake of his cooking. He would ask us to drive him regularly the 93 miles back to Safford to the Thrifty store so he could buy his Albuquerque tortillas and just to see who he would meet and visit with.

Dad remained a faithful practicing Catholic to the very end and when asked if he wished to receive Holy Communion he’d say “yes, that is something I will never refuse”.

I know only that now he is at peace and dancing up a storm with Mom. I’m sure he’s picking her up and cradling her in his arms just like he used to try to do when they were both young. I know of a couple of times he dropped her and she got terribly upset with him, but I’m sure she is enjoying it now.

We wish to thank: Starfish Care Homes in Tucson, AZ., for the dignity, respect and care they showed and provided our father while he lived there. The Southern Arizona VA Health Care System, Safford, Sierra Vista, Tucson SE Clinic’s and Main Hospital, for the excellent care they provided our father for the last thirteen months of his life. The Gila Valley Veterans Honor Guard, which included some members of VFW Post 10385, which Dad was a member of, for the presentation of the colors. The St Rose of Lima Spanish Choir, “Coro Mensjero.” The Arizona Patriot Guard Riders, who escorted Dad from St Rose of Lima, Safford to Bunker Cemetery in Morenci. The committal, with military honors conferred by the Fort Huachuca United States Army Honor Guard Detail, at Bunker Cemetery in Morenci. The Altar Rosary Society, Holy Cross Parish in Morenci, for providing all our family and friends a delicious lunch. The Vining Funeral Home, for the help, guidance and service they provided making this process bearable.