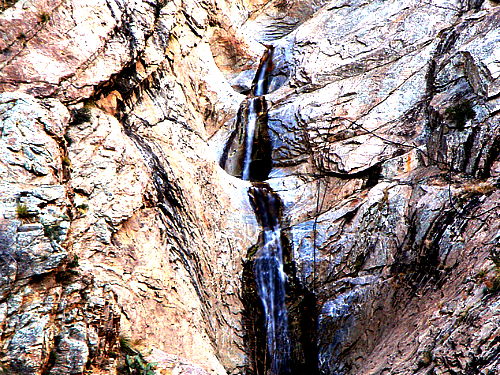 Cliffhanger: Stranded Scout at Frye Mesa Stuck on a Ledge

On June 3rd, Officer Smith and Nelson responded to a citizen assistance incident at the Frye Mesa Reservoir. Samuel Claridge had climbed up a cliff face in the canyon and could not safely climb down from his precarious perch.

At 7:04, the responding officers arrived at the parking area near the reservoir. Quickly, they made contact with Aaron Burk, who said he was visiting with a varsity scout group from Pima. One of the boys in the scout group, Samuel Claridge, had climbed up the rock cliff and couldn’t come down again. Burk stated that he would prefer to call Search and Rescue instead of trying to retrieve the scout himself.

Once they made their way to the base of the waterfall, they could see Claridge sitting on a ledge sixty to seventy feet above the base of the cliff. He had been sitting on the ledge since six thirty, and was not injured. Claridge was in good physical condition.

After assessing the situation, the officers determined that they would need a rope team to rescue Claridge. At roughly 8:15 the search and rescue team showed up with the gear necessary to retrieve Claridge from his perch. By nine o’clock, the young scout was rescued.

When the officers asked him how he had gotten stuck, Claridge stated that he wanted to climb up the rock face to slide down the waterfall. Halfway to the top he realized it was a bad decision and found a ledge to sit on.

The old saying still goes, “Look before you leap.” Another saying should be, “Look before you climb.” Luckily, the scout is safe. Although nobody would envy him the tongue lashing he probably received when he returned home that night.