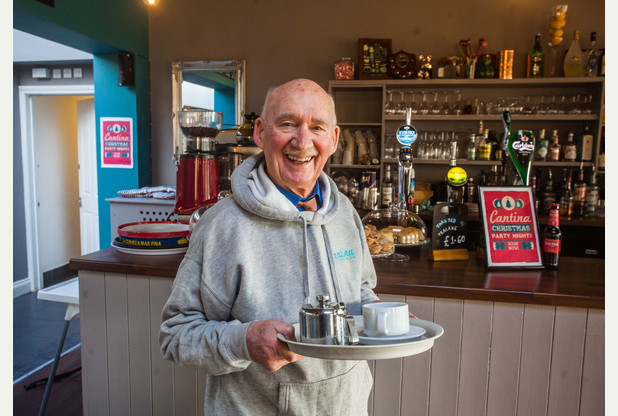 Joe Bartley wears the staff uniform at the Cantina Bar and Kitchen. 01/12/2016 See SWNS story SWJOB; An 89-year former soldier who issued a plea for a job to stop him 'dying of boredom' has been offered his first job after passing an interview. Joe Bartley says he is stunned by the reaction to his advert that he posted in the classified section of his local newspaper a week ago. Since then the widower of Paignton, Devon, has received scores of offers of work and been the subject of worldwide interest. And he said he had his first interview at the Cantina Cafe in his home town which was successful.

LONDON (AP) — An 89-year-old army veteran who made national headlines in Britain with a newspaper ad seeking work has started his new job.

The Cantina Kitchen & Bar in the seaside town of Paignton in southwestern England announced on its Facebook page that Joe Bartley was starting work Sunday.

The widower, whose wife died two years ago, placed the ad because he was “dying of boredom.” He says his building has a community area but “not a soul comes in,” and when he returns home, there’s “nobody to talk to.”

The local cafe made him an offer and the Herald Express newspaper posted a video of Bartley walking in to applause.

Bartley told the BBC he was “overwhelmed by all the attention” and was looking forward to “getting down to the job.” 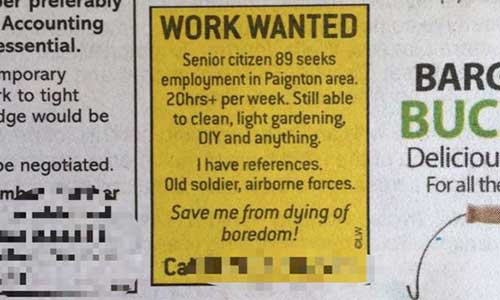