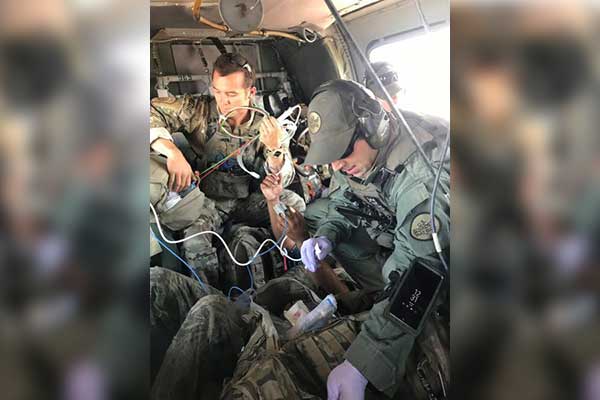 TUCSON, Ariz. – Two men were hospitalized after human smugglers pushed a group of illegal border crossers to their physical limit in a desert mountain range west of Tucson Wednesday.

Medically trained agents called for an airlift of the unconscious man, while working to stabilize him. Others began to locate members of the group who had split-up, and were hiding in a rocky valley to avoid being arrested.

Air and Marine Operations, from the Tucson Air Branch, launched a Blackhawk helicopter to airlift the unconscious man from the mountains to a waiting medical helicopter.

After hiking for 10 hours, agents ultimately arrested a total of 18 illegal aliens, 16 males and two females, from Guatemala, Honduras, and Mexico. The group was found exhausted and needing water. A second man was later taken to the hospital for chest pains.

All of the individuals are in stable condition and facing federal immigration charges following their illegal entry into the U.S.

Smugglers often lead groups of illegal immigrants through very difficult terrain with limited resources, abandoning anyone who cannot keep up. The Border Patrol advises anyone in distress to call 911 or activate a rescue beacon as soon as possible.