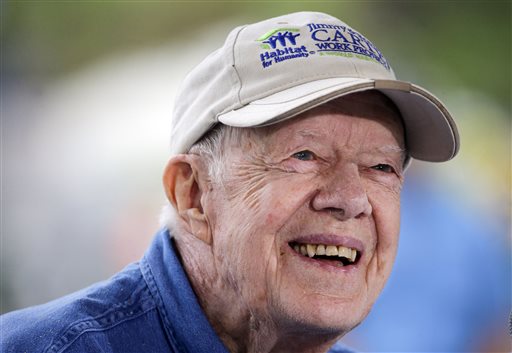 FILE - In a Monday, Nov. 2, 2015 file photo, former President Jimmy Carter answers questions during a news conference at a Habitat for Humanity building site, in Memphis, Tenn. The global human rights group The Elders said in a statement Wednesday, May 25, 2016, that former President Carter is stepping away from his front-line role as a member of the organization. The Elders said that Carter will remain affiliated with the group as an honorary, or emeritus, Elder starting June 1. (AP Photo/Mark Humphrey, File)

ATLANTA (AP) — Jimmy Carter is stepping away from his “front-line role” as a member of The Elders, the global human rights group announced Wednesday.

Former South African president Nelson Mandela founded the small group of former global leaders in 2007, and the former U.S. president participated in its first mission later that year in Sudan, focusing on Darfur. The organization said Carter has “played a key role” in every delegation in the Middle East, including trips last spring to Israel and Palestine as well as a meeting with Russian President Vladmir Putin in Moscow.

The statement gave no specific reason for the change in Carter’s status. The group also announced that former Brazilian president Fernando Henrique Cardoso will step down and become an honorary member with Carter on June 1. The Elders already list Archbishop Desmond Tutu, who stepped down in 2013, as an emeritus member.

“From the Middle East to climate change, women’s rights to superpower diplomacy, Jimmy has brought the gravitas of his presidential office but also the passion of an activist who believes the world can, and must, be changed for the better,” Kofi Annan, chair of the London-based organization, said in a statement. “The Elders would not be the organisation it is today without his drive and vision, and he will stay an inspiration for all of us for many years ahead.”

A spokeswoman for Carter declined further comment on Wednesday.

Carter, 91, announced in August that he had skin cancer that had spread to his brain. At the time, he said he would begin receiving a cancer-fighting drug. In March, Carter said that he had stopped treatment after several scans found no cancer in his body.

He has showed no signs of slowing down, including work at The Carter Center, the human rights organization he founded after leaving the White House, and other projects.

Carter told The Associated Press earlier this week that he’s lost some strength but is feeling better. He said his doctors continue to closely monitor him for signs of cancer. He also detailed plans for a stronger focus on fighting racism by the New Baptist Covenant, an effort he announced in 2007 to unite Baptists.

The project has so far brought together black and white churches in a few communities to build relationships and address social issues, including discrimination. The next meeting of the New Baptist Covenant will be a summit in Atlanta on Sept. 14 through Sept. 16, and will feature a keynote speech by Carter, along with training for a new group of churches joining the program.

Carter said that after the successes of the civil rights movement, in the 1960s and 1970s, “we kind of breathed a sigh of relief in this country that we found a way to solve the racial issue that has blighted society. Most recently, we’ve seen that was an overly optimistic assessment.”

Among the problems he cited are the high rate of incarceration for blacks, police shootings of unarmed blacks and poor public education in black communities.

“These kinds of things are vividly in the minds of the American people than more than five years ago,” Carter said.