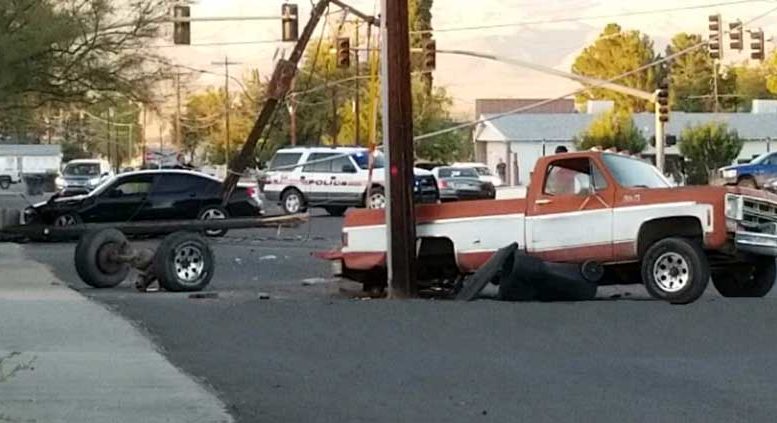 Contributed Photo/Courtesy Brian Matthews: The power to Thatcher and EAC got knocked out Tuesday after a black sedan crossed the center line, collided with a pickup truck and took out one utility pole and damaged a second.

THATCHER – A two-vehicle collision Tuesday night on Stadium Avenue knocked out power to a large portion of Thatcher for hours as one of the vehicles sheared a utility pole. There were no serious injuries reported.

According to a Thatcher Police press release, officers were dispatched to N. Stadium Avenue just south of the intersection with U.S. Highway 70 at about 5:18 p.m. regarding a vehicle collision that involved some utility poles. 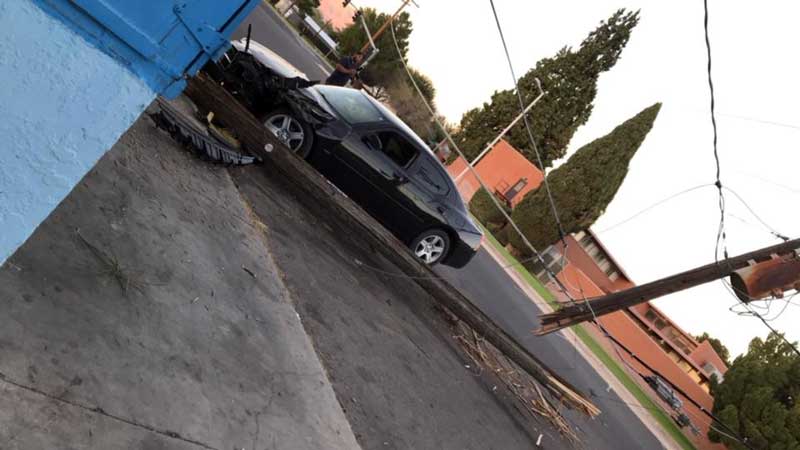 Upon arrival, officers located a broken utility pole with its wires hanging across Stadium Avenue. Nearby was a severely damaged black, four-door sedan that had come to rest in front of the Hawaiian Snow frozen beverage stand. Further southbound, an older model, GMC pickup truck was found missing its entire rear axle. 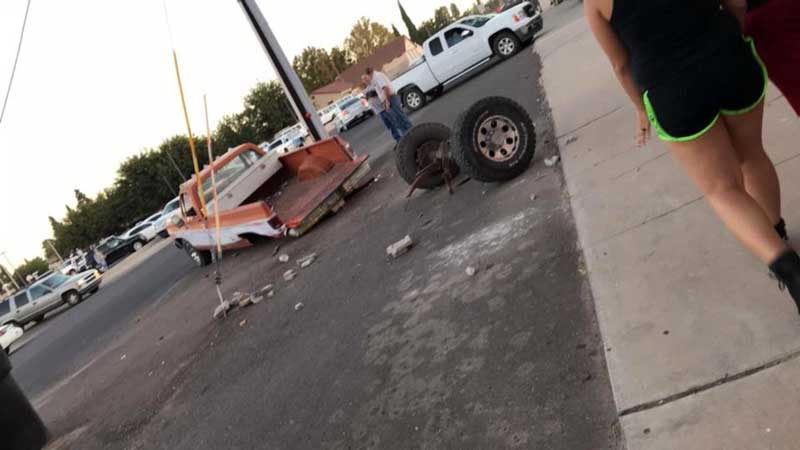 According to the release, the black sedan, driven by Edwin Albarran, of Safford, was northbound on Stadium Avenue at an apparent high rate of speed when it crossed the center line and struck the southbound GMC pickup, driven by David Barron, of Graham County. The sedan hit the truck in the rear of its driver’s side, knocking off its rear axle. The contact with the truck also caused the sedan to slide sideways into a 3,000-pound concrete barrier used to protect a utility pole. The force of the collision was so great that it moved the concrete barrier and sheared the utility pole in half. 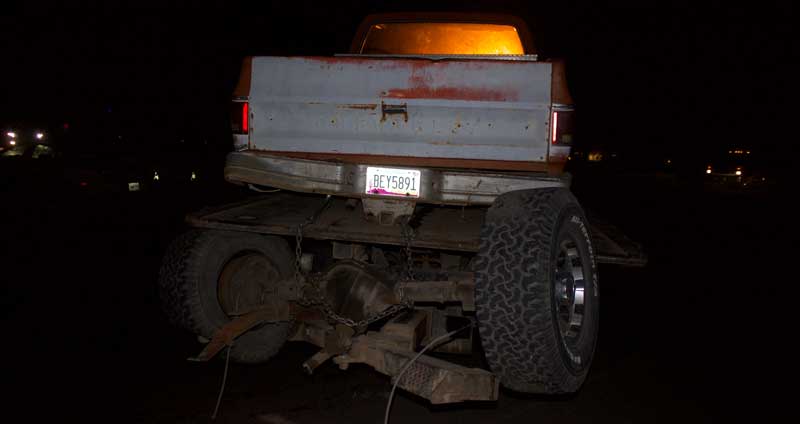 Jon Johnson Photo/Gila Valley Central: The vehicles were towed from the scene roughly an hour after the collision.

Both drivers emerged from their vehicle’s unscathed except for some minor scratches, according to the release. While it appears Albarran is likely to receive a citation for crossing the center line and being the cause of the collision, the crash is still under investigation.

Power was out at the traffic lights at Stadium Avenue and Third Avenue after the crash, as well as a large section of the town of Thatcher. Due to the severity of the crash and the danger caused by the downed utility pole, the area was cordoned off by crime scene tape as workers attempted to clean up the area and then restore the power.

The power interruption also caused the EAC Children’s Theatre rehearsal to go completely dark in the Lee Little Theater – filled with young children – and forced a dance class at the college to be held outside on the sidewalk with car headlights for illumination. 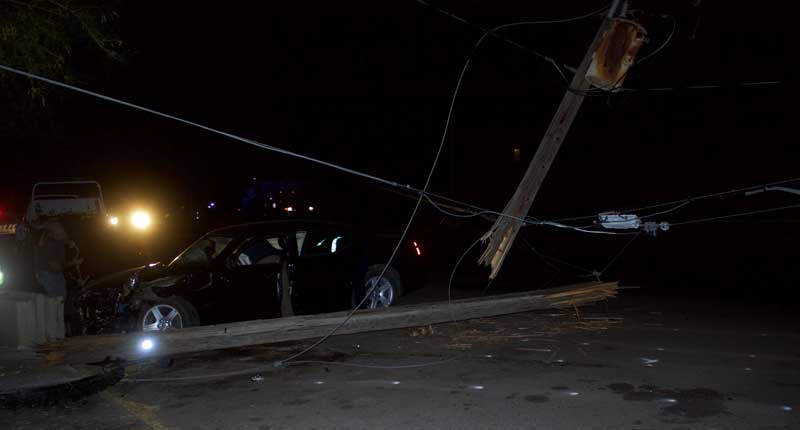 Jon Johnson Photo/Gila Valley Central: This black sedan wasn’t able to be removed until after more than an hour.

Crews with the town of Thatcher and Graham County Electric Cooperative worked to restore power at the traffic lights and to the town for several hours as residents gathered on the street to see what the commotion was about and converse with their neighbors. Some areas didn’t get the power restored until roughly 11 p.m., according to reports.

“We want to express our appreciation to all of the agencies (Safford Police Department, Graham County Sheriff’s Office, Lifeline Ambulance, Graham County Electric and the town of Thatcher) for assisting us with this collision and are thankful that no-one was seriously injured in this collision,” said Thatcher Police Chief Shaffen Woods.

Graham County Electric Cooperative General Manager/CEO Kirk Gray told Gila Valley Central that his crews replaced one pole Tuesday night and stabilized the other before returning in the daylight to replace it. He stated hazardous working conditions, including working in such a congested area at night, as a reason to finish the job in the daylight with as minimal service interruption as possible. He also added that the co-op had taken over that service area from Thatcher in accordance with the Wheeling Transmission Agreement and that the poles that were damaged were likely on its list to be replaced anyway due to their advanced age between 30 to 40 years.