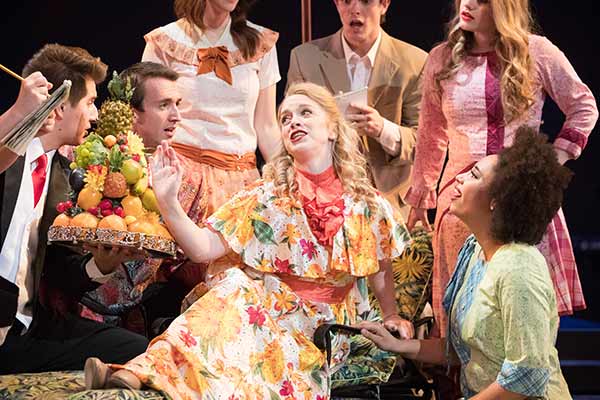 Brigham Young University’s Young Ambassadors will be performing at the EAC Fine Arts Auditorium on February 14, 2018 at 7:00 PM. The event is being sponsored and coordinated through the Gila Valley Institute of Religion. Tickets can be purchased at the EAC ticket office.

Every year, millions of children all over the globe are fed, loved, taught and nurtured at home. Moms and Dads discover a lot of fun surprises along the journey of growing up with their kids. Home, for many lucky families, is that safe haven from this crazy, fast-paced, and sometimes un-welcoming world. Learning to work, to play, to share and trust, to be kind and to love, begins, for so many, right at home with their family. With tours currently scheduled in China and across the United States, BYU Young Ambassadors invites you to join in a celebration of the family with their new musical revue—Welcome Home.

Come along on our family road trip with its unexpected twists and turns or enjoy a fun family night at the movies. Featuring songs and dances from many eras, Welcome Home is an upbeat scrapbook of cherished memories.

Young Ambassadors is a group filled with members who are excited to share their talents, experiences, and love through their new show, Welcome Home. With tours in 68 countries over 46 years, the world-traveled troupe shares decades of the best in entertainment with music by recording artists Ed Sheeran, Billy Joel, Judy Garland, the Beach Boys, Rascal Flatts, Brad Paisley and Frank Sinatra. Welcome Home, a musical kaleido- scope of family fun, delivers dynamic choreography, colorful costumes and a musical lineup of international hits and popular Broadway show tunes from Hamilton, Footloose, In the Heights, Singin’ in the Rain and the beloved Wizard of Oz.

Since 2000, Young Ambassadors have been to Brazil, Argentina, the 2002 Winter Olympics, Canada, Russia, Australia, Hong Kong, Korea, Japan, China, Africa, Tasmania, throughout Scandinavia, and all over the

Throughout the world, Young Ambassadors are followed by a strong reputation as wholesome, profes- sional entertainers. The group has recently traveled to Brazil this past summer to share their message and show. This year, they will take their show to cities in Arizona.

Young Ambassadors represents the School of Music in cooperation with the Department of Dance from the College of Fine Arts and Communications at Brigham Young University in Provo, Utah. BYU is one of America’s largest private universities with more than 30,000 students from all over the United States and 100 foreign countries.

In 1970, eighteen-year-old Young Ambassador member, Randy Boothe had no idea that only a few years later, in 1977 till the present day, he would travel the globe as Young Ambassadors Artistic Director.

In addition to his work with Young Ambassadors, Boothe has also directed for Walt Disney Productions, Jack- son Hole Playhouse, and Hawaii’s Polynesian Cultural Center. Boothe’s productions have taken him around the globe with live and televised appearances in over 43 countries. His work was even seen during the 2002 Olym- pic Winter Games where he co-directed a major production involving hundreds of cast members. His musical groups have performed for children in hospitals and orphanages and for royalty and government officials in elegant concert halls.

Chamber Orchestra in Washington, D.C. On returning to work with Young Ambassadors, Hansen says, “It is a deep joy and privilege for me to now be one of the directors, and particularly to be able to once again serve on the front lines of actively sharing the image, message, stature, and values of BYU to the world.”