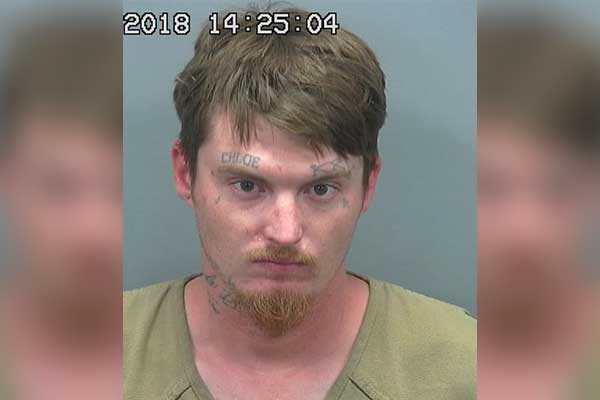 Safford – Authorities were dispatched to Crimson Canyon Drive at about 3:00 am on June 17, in regard to an intoxicated man who allegedly had broken a window in the back yard of his girlfriend’s home.

When police arrived they didn’t find anyone in the backyard, but could see the broken window under the back porch, which led to a bedroom. The responding officer made contact with the reporting party at the home who was apparently upset and scared. The officer noted that the woman had a swollen cheek and asked what happened. The woman said that Salmon had struck her.

The woman reported that her boyfriend, identified as Kevin Salmon, had assaulted her while they were at McDonalds. The woman reportedly left Salmon there and drove home. She said she had only been home a few minutes when Salmon showed up and started banging on the doors. The woman said she heard Salmon banging on the garage door before he went around to the back of the house and broke the window.

Other officers were called to the scene to help search for the suspect. The group walked and drove around the area but were unable to locate the suspect. During the search they were advised that Salmon had a warrant for his arrest out of Gila County. While the other officers left, the first officer on the scene stayed, parking his unmarked patrol car across the street.

Soon the officer heard a noise by the garage and the woman came out of the house and walked toward the garage. After a brief exchange of words, she ran back to the front door with Salmon chasing her. The officer exited his vehicle, drew his service weapon and ordered the man to the ground. Salmon complied. The officer advised the man that he would be tased if he tried to move.

After confirming his identity, Salmon was searched and placed in the patrol car. The officer asked Salmon what happened at McDonalds. Salmon claimed that his girlfriend had assaulted him and that he got out of the car and was trying to beat her back to the house so he could get some of his things out. The officer told him that the woman accused him of hitting her. Salmon replied that he might have hit her while getting out of the car. According to the police report, he also admitted to breaking the window.

Salmon was booked in the jail on charges of assault, domestic violence, disorderly conduct, criminal damage, and for the warrant from Gila County.