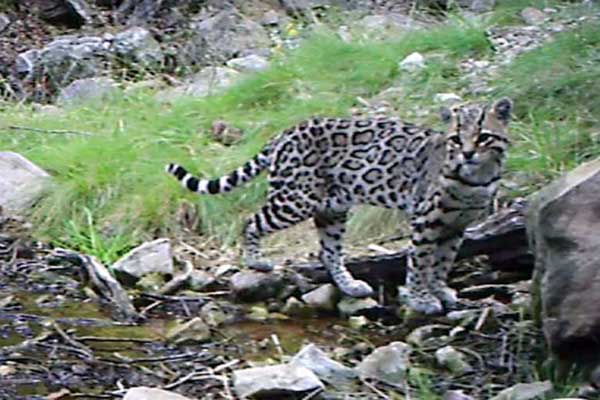 DOUGLAS, Ariz. — While there are plenty of arguments over whether a wall should be built along the U.S.-Mexico border, the issue has become life and death for the endangered Sonoran ocelot.

Conservationists say a rare and wild ocelot was filmed by a remote sensor camera recently in an isolated area of Arizona. Robert Peters, senior representative with the Southwest office of Defenders of Wildlife, said the endangered cats range from the mountains of southeastern Arizona to northern Mexico, where most of the breeding pairs exist.

“Conservationists have the dream that eventually there could be breeding populations again in the U.S.,” Peters said. “But if the border wall goes up, that’s the end of that.”

According to the group Conservation CATalyst, the recent video is the first publicly released trail camera views of an ocelot in his Arizona range. The shy cat has been seen intermittently in the region for several years.

Peters said the only remaining areas where ocelots range in the U.S. are in Arizona and the Rio Grande Valley of Texas. He said ocelots use their spotted coat as camouflage when they migrate to stay clear of humans.

“In particular, some of the more mountainous areas are still open, and those are typically where the cats travel because there aren’t a lot of people and there’s good cover,” he explained. “So, they tend to come up in the mountain areas.”

Peters said while Sonoran ocelots could be one step closer to extinction if a wall with no breaks is built, the cats also face direct threats from poaching, poisoning, collisions with vehicles and other disturbances in the border region.

“The fact that these incredibly rare, beautiful animals are still making it across the border in the U.S. is giving us hope that, ultimately, we can re-establish breeding populations and truly restore them to being important parts of our national fauna,” he said.

Peters said ocelots have always had a presence in the southwestern U.S., with records in Arizona dating back to the 19th century.