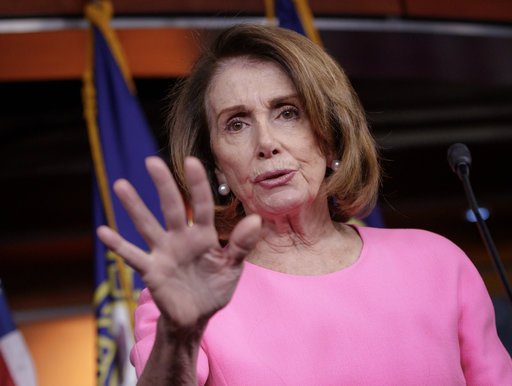 FILE - In this March 30, 2017 file photo, House Minority Leader Nancy Pelosi of Calif. speaks with reporters on Capitol Hill in Washington. President Donald Trump could avert the risk of a government shutdown next weekend by stepping back from his demand that lawmakers fund his promised border wall with Mexico in a must-pass spending bill, Congress’ two top Democrats said Monday, April 24, 2017. (AP Photo/J. Scott Applewhite, File)

The border wall money is fiercely opposed by Democrats, whose votes are needed to pass the legislation, and they are equally incensed over Trump’s threat to deprive former President Barack Obama’s health care law of key funds to help poor people.

Those were the most pressing unresolved issues confronting lawmakers as they returned from a two-week spring recess to face a critical deadline. Congress must pass a $1 trillion catch-all spending bill to pay for all agencies of government by midnight Friday or trigger a partial shutdown the next day, which happens to coincide with the 100th day of Trump’s presidency.

The standoff echoed similar spending fights during the Obama administration when Republicans would push to “defund” Obama’s health law over the objections of Democrats. Even though Republicans now control both chambers of Congress and the White House the dynamics are not all that different, given Democrats still have leverage and Republicans fear that as the party in charge, they would shoulder the blame from any shutdown.

It’s increasingly obvious that the House and Senate will have to pass a temporary funding extension of a few days or more to prevent a shutdown this weekend and allow more time for talks.

“I do not think the election was a referendum on building a wall to the tune of tens of billions of dollars,” said House Minority Leader Nancy Pelosi, D-Calif.

The negotiations over the spending bill took center stage despite a separate White House push for fast action to revive health care legislation to repeal and replace the Affordable Care Act. After signaling last week that they hoped for a vote as soon as this week on a rewritten health bill, White House officials softened their stance Monday. Echoing the views of House GOP leaders, White House press secretary Sean Spicer said there would be a vote on health care legislation when House leaders count the 216 votes needed to pass it.

“I think we want to make sure that we’ve got the votes and we’re headed in the right direction before putting some artificial deadline,” Spicer said. 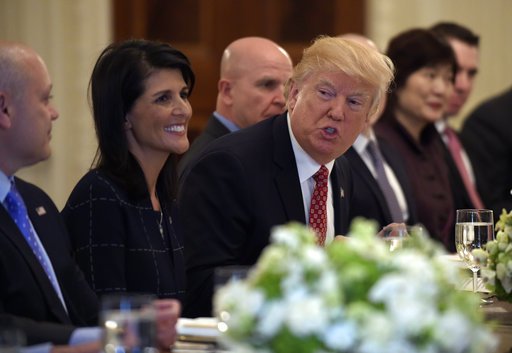 President Donald Trump, sitting next to U.S. Ambassador to the UN Nikki Haley, speaks during a working lunch with ambassadors of countries on the United Nations Security Council and their spouses, Monday, April 24, 2017, in the State Dining Room of the White House in Washington. (AP Photo/Susan Walsh)

Trump and House Speaker Paul Ryan were embarrassed last month when they had to pull their “Obamacare” replacement bill off the floor without a vote as it became clear it would fail. Since then leaders of conservative and moderate factions in the House have been negotiating on a compromise allowing states to opt out of certain “Obamacare” requirements, and they appear to be making progress, although legislative text had not been finalized as of Monday.

The original GOP bill eliminated many of the “Obamacare” mandates, offered skimpier subsidies for consumers to buy care and rolled back a Medicaid expansion. Conservatives balked, saying it didn’t go far enough.

With Democrats unanimously opposed it remains to be seen whether the deal will come together and attract the needed support. Trump talked it up on Twitter, writing Monday, “If our healthcare plan is approved, you will see real healthcare and premiums will start tumbling down. ObamaCare is in a death spiral!”

Trump also pushed for his border wall, a central campaign pledge that he still insists Mexico will pay for in the end, though Democrats and even most Republicans doubt that will ever come to pass. Cost estimates for the wall range past $20 billion and Republicans are seeking $1.4 billion as a down payment in the spending bill.

Trump turned again to Twitter: “The Wall is a very important tool in stopping drugs from pouring into our country and poisoning our youth (and many others)! If the wall is not built, which it will be, the drug situation will NEVER be fixed the way it should be! #BuildTheWall.”

Prior to the White House demand late last week for border wall money in the spending bill, it had largely been assumed on Capitol Hill that the measure would include funding for additional security steps along the border, but that there wouldn’t be any money explicitly dedicated for new wall construction.

The other major stumbling block involved a demand by Democratic negotiators that the measure fund cost-sharing payments to insurance companies that help low-income people afford health policies under Obama’s health law, or that Trump back off a threat to use the payments as a bargaining chip. The subsidies are embroiled in a lawsuit brought by House Republicans, and supporters of the health law warn that its marketplaces could collapse if they are taken away.

GOP leaders warn, however, that it would be exceedingly difficult for Republicans controlling Congress to give in to Democratic demands to include the cost-sharing payments — they help low-income people with copayments and other out-of-pocket “Obamacare” costs — at the same time Republicans are trying to repeal major pieces of “Obamacare.”

Trump does appear poised to win a significant supplemental Pentagon funding package that, while still subject to negotiations, could top $15 billion.