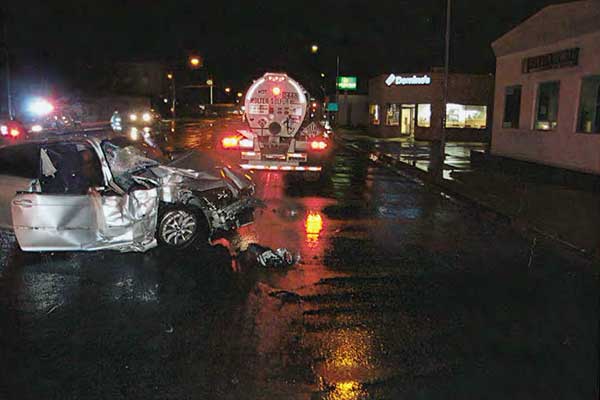 SAFFORD – Just before 10:00 pm on Saturday night during a severe rainstorm, several officers responded to a two vehicle accident that occurred on the 400 block of Highway 70. When they arrived at the scene, authorities could see a semi truck with a trailer in the far right lane facing west bound and a silver BMW in the lane next to it facing north with substantial front end and passenger front end damage.

An officer reported that, with the rain, they were only able to travel around 25 m.p.h. with their lights and sirens. The officer parked their patrol car on the east side of the BMW to block the west bound traffic. When the officer went to the broken passenger window of the BMW, they could see a male with his feet in the driver’s seat floor board and his head on the passenger side dash. As the rain continued to come down intensely, the officer called out to the man but didn’t get a response. The officer could see that the man was bleeding from his face. The officer could feel the man had a pulse and could see he was breathing. Graham County Deputies also arrived and assisted while authorities watched over the man until Southwest Ambulance arrived. Paramedics were able to remove him from the vehicle and place him into the ambulance to transport him to the Mount Graham Regional Medical Center with another officer following from behind. The police were able to obtain a sample of the man’s blood.

The officer on scene could see that the rear driver’s side tires of the semi truck had impacted the front passenger side of the BMW and it had drug it to the west. Authorities could tell by the gouge marks in the roadway, the potential point of impact was in the northeast section of Highway 70, Central Avenue area.

The driver of the semi truck told police that he was traveling west bound in the far right lane of Highway 70. Around the Central Avenue intersection, he thought he saw a vehicle while he was traveling at about 35 m.p.h. The driver believed the BMW was heading north bound when the rear of his trailer collided with the BMW. The driver stated he only saw the vehicle for a “split second.” He had his windshield wipers and lights on and there was no other traffic on the road.

Officers photographed and attempted to mark the scene, but it was difficult in the rain. A tow truck was called to remove the BMW, and they conducted repairs to make the semi trailer mobile again.

Apparently the BMW was crossing the highway from Central Avenue and partially drove under the rear section of the semi trailer. The semi trailer’s rear tires collided with the front right portion of the BMW. The point of impact appeared to be where the passenger side window landed on the roadway near gouge marks on the scene.