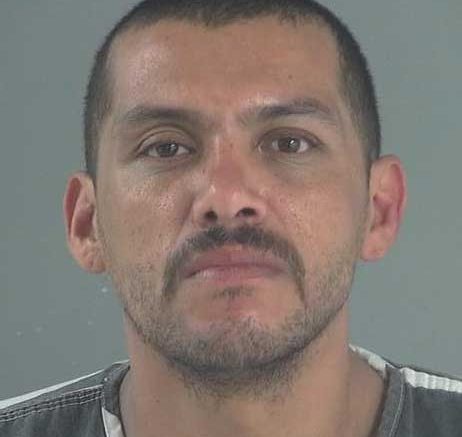 SAFFORD – A Safford man apparently decided to take some drugs with him on an ATV ride and wasn’t too happy when officers attempted to incarcerate him.

While on patrol Saturday at about 11:10 a.m., officers noticed two men traveling at a high rate of speed on an ATV southbound on a canal road adjacent to Entertainment Avenue. As the ATV approached U.S. Highway 70, the occupants jumped off and appeared to check the vehicle’s tires.

One of the officers believed he recognized the driver as someone who has been linked to several recent stolen ATVs.

The officers approached the men and began speaking with them. An officer noticed the ATVs ignition was broken and that one of the men had a screwdriver on him.

Soon after, one of the men, identified as Anzar, attempted to pull away from an officer. The officers struggled with Anzar and eventually took him into custody. A search of his person yielded variety of illicit substances, including .5 of a gram of methamphetamine, .1 of a gram of heroin, 2 grams of cocaine, 1 gram of marijuana, a metal pipe and a glass pipe.

Anzar claimed the items in his pocket all belonged to his brother, Delorenzo Anzar, who was the other man on the ATV.

“All that stuff you found in my pocket is Delorenzo’s,” Richard Anzar allegedly said. “Delorenzo, this is all your stuff.”

Richard Anzar then allegedly asked the officer if he could “just dump all that stuff out in the street so (the other officer) doesn’t see it?”

A Motor Vehicle Division check of the ATV showed it registered to a man out of California and no local record of an owner could be found. Richard Anzar insisted that he borrowed the ATV from his uncle and that it was not stolen.

A Graham County deputy arrived and Richard Anzar was placed into his patrol vehicle. After Richard Anzar began kicking the deputy’s window, the officers removed him from the vehicle to place him into a nylon hobble leg restraint.

During the application of the restraint, Richard Anzar allegedly kicked the officers multiple time, adding the aggravated assault and resisting arrest charges to his docket. He was then successfully restrained and taken to the jail without further incident.

The officer gave a citation to Delorenzo Anzar for possession of drug paraphernalia and the ATV was towed from the scene by Nuttall’s Towing.

Later at the jail, Richard Anzar allegedly apologized to an officer for his actions and said he was just scared about the repercussions for the drugs he had on him.