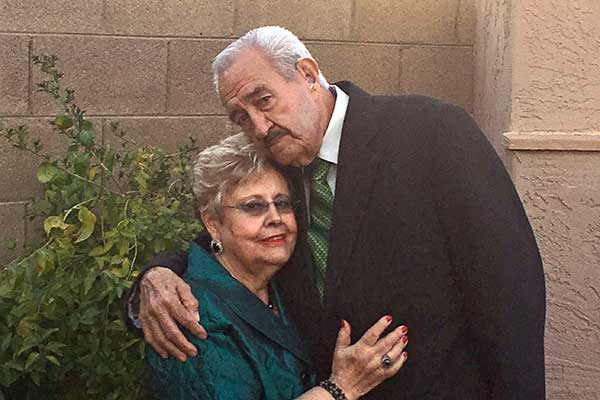 Arnold and Teresa Espinoza, longtime residents of Thatcher entered into eternal rest separated in passing by five days. Mr. Espinoza passed away Monday afternoon, January 18, 2021, at the Mount Graham Regional Medical Center, and was reunited in Heaven with his sweetheart of 65 years, Teresa, on the evening of Saturday, January 23, 2021.

Guadalupe Arnoldo Espinoza was born one December 12, 1932 in Naco, Sonora Mexico. Being that his mother, Guadalupe Espinoza, was a United States citizen, he took on his citizenship in the United States Army were he served during the Korean War. Upon returning he went to work at Phelps Dodge Corporation in Bisbee, Arizona, where he developed his career as a General Foreman of the Tire and Lube Shop in Morenci, Arizona until his retirement. He gave back to his community as a Babe Ruth Coach coaching baseball for many years for children 13-15 years old. Guadalupe was also a referee for football and basketball as well as a baseball and softball umpire for over 40 years.

Teresa Espinoza, was born on September 11, 1934 in Naco, Sonora Mexico to Ramon and Rafaela Cordova. Teresa was a very devout Catholic who committed her life to working for her church as a Eucharistic minister, in the church choir and leading bible study meeting for many years. Arnoldo and Teresa were married on January 28, 1956. Together they formed a beautiful family of nine children who they leave behind: Teresa Anderson (Paul), Patricia Luna (Ralph), Francisco “Pancho” Espinoza (Donna), Arnold Espinoza (Stephanie,) Ramón Espinoza (Rosie), Esperanza Corbell (Travis), Leticia Elizondo (Jose), Carolina Gaethje (Ray) and Cristina Contreras (Freddy); as well as thirty grandchildren; fifty-two great grandchildren; Guadalupe’s sister ,Martha Miranda (Ramón); and nephews and nieces. Guadalupe and Teresa were preceded in death by: their parents, Manuel and Guadalupe Espinoza and Ramon and Rafaela Cordova; their son, Jose Espinoza; and five siblings.

A Memorial Mass of Christian Burial for Guadalupe and Teresa will be celebrated Friday, February 12, 2021, at 11:00 a.m., at St. Rose of Lima Catholic Church by Rev. Nicodemus Shaghel. Military honors for Mr. Espinoza will be conferred by the Gila Valley Veterans Honor Guard.

Those who would like to attend the services via Facebook Live can join on Vining Funeral Home’s Facebook page, www.facebook.com/viningfuneral, Friday morning, February 12, 2021, at 10:00 a.m. (MST).

Guadalupe and Teresa will be laid to rest at a private family inurnment at the Queen of Heaven Cemetery Mausoleum Saturday afternoon, February 13, 2021.

In lieu of flowers the family requests a donation be made to the Alzheimer’s Association, https://act.alz.org/site/Donation2?df_id=32112&32112.donation=form1&utm_source=google&utm_medium=paidsearch&utm_campaign=google_giving&set.custom.wt=giving&gclid=Cj0KCQiA0rSABhDlARIsAJtjfCcVk156c765wWaB3g2zJoUKc7A3riTm6Z3cz4CiYlW00zdo2W0MZoUaAhETEALw_wcB, in Guadalupe’s and Teresa’s memory.