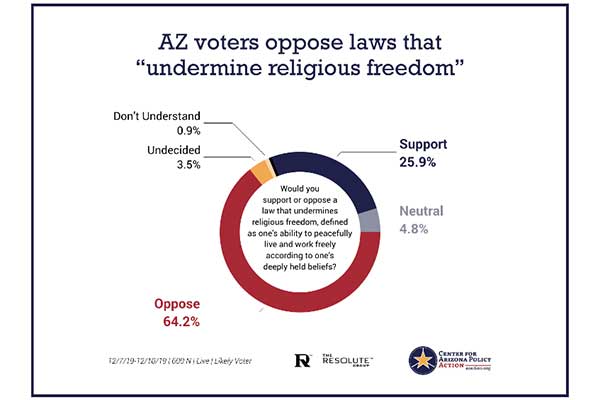 Phoenix, AZ – The Resolute Group has released the results of a statewide survey commissioned by Center for Arizona Policy Action revealing the views of 600 likely Arizona voters on religious freedom and parents’ rights.  The live survey was conducted December 7-10, 2019.

In a series of questions, Arizona voters revealed that while they believe discrimination against LGBTQ people happens “a lot” (42.7%) or “sometimes” (39.9%), 47.8% of respondents do not support creating new protected classes in civil rights law based on sexual orientation or gender identity.  Only 35.1% support it, with 9.0% undecided.

A majority (64.2%) of respondents would oppose a law that undermines religious freedom, defined as one’s ability to peacefully live and work freely according to one’s deeply held beliefs.  Opposition was bipartisan with 67.0% of Republicans, 60.9% of Democrats, and 63.9% of Independents opposing it.

When asked to choose a statement that most closely matched their thoughts on religious freedom, 76.9% aligned with the statement “I support it! Every American should be free to peacefully live and work according to their beliefs, even if their beliefs are unpopular.”  Only 15.2% felt that “Religious freedom should be limited because it is often used as a weapon to discriminate or hurt other people.”

Next, Arizona voters were asked about “non-discrimination” laws in the context of their effect on the speech and participation of creative professionals.  56.0% of respondents stated they would not support such a law in Arizona.  When respondents were given the story of Barronelle Stutzman, a business owner affected by a similar law in the state of Washington, opposition went up by 8.3% to 64.2%.

Voters also showed significant concern for the safety and privacy of women and girls.  When hearing that “non-discrimination” laws had the effect of giving biological males access to gender-specific locker rooms, showers, and bathrooms, 63.0% of respondents were opposed.

Cathi Herrod, President of Center for Arizona Policy Action, believes the results send a strong message to Arizona’s leaders and representatives. “Contrary to the narrative often repeated by the left, Arizona voters support religious freedom and parents’ rights. They aren’t buying the radical, socially progressive demands of the left. They don’t want to see legislation that undermines their first amendment freedoms and threatens the safety and privacy of their mothers, sisters, and daughters.  They don’t want their young children being exposed to increasingly graphic and explicit sex-ed.  To politicians who believe they will be more viable if they avoid social issues, these results speak for themselves.”

George Khalaf, pollster and co-founder of The Resolute Group issued the following statement.  “The results of this survey indicate that Arizona voters come down on the side of family values, religious freedom, and parents’ rights.  When voters learn how “non-discrimination” laws harm creative professionals, a majority oppose them.  The bipartisan nature of many of these results is notable. Opposition to laws undermining religious freedom is strong across political parties and a majority from both parties support ending sex-ed at least through 4th grade. As candidates across Arizona establish their positions ahead of the 2020 election, they should take note of these results. These issues will be front-and-center in the months ahead when Arizona voters make their decisions.”