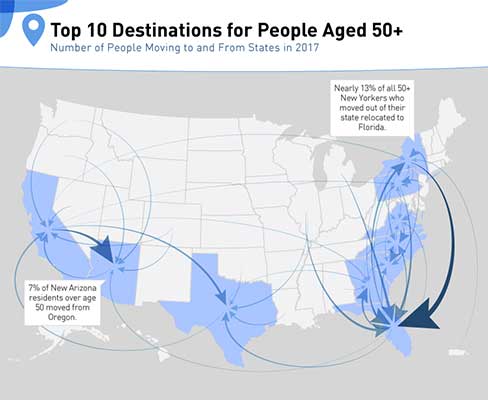 Many people relocate after they retire. SeniorLiving.org recently examined a decade of migration data from American Community Surveys (ACS) to learn where Americans are moving once they hit the age of 50.

The study found that Arizona is the number three destination for people age 50 plus. According to the study, 85, 500 Arizona resident in this age category have migrated from another state. Most of the 50 plus people who relocate to Arizona originate from California, Colorado, Florida and Washington, respectively.

Lake Havasu City and Kingman ranks as the number 4 most popular metro area for 50+ relocations. Slightly more than 8% of the 50+ residents are new to town and 54.3% of the communities population are over 50. Yuma with 8.1% and Prescott with 6.6% have some of the highest rates of unemployed transplants aged 50 and older.

Retirement relocation is fairly common. According the study, 41% of people aged 50 and older who move to a new city or state are unemployed.