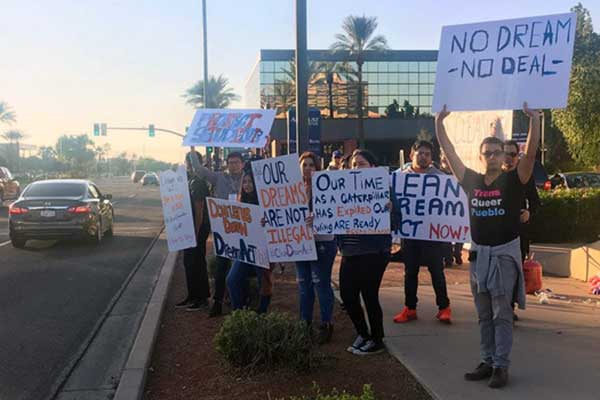 – Jewish groups in Arizona held a rally yesterday evening in Phoenix to show their support for the “Dreamers” – people who were brought to the U.S. as children.

The DACA program, which gives them legal status, expires next Monday, and so far there is no agreement in Congress to help them.

A.J. Frost, with the groups Jewish Social Justice Action and Arizona Jews for Justice, is organizing the rally. He says Jews throughout history have suffered rejection and harassment from various governments, so they identify with the dreamers’ plight.

“This feeling of vulnerability is ever present in our consciousness and we wanted to get together to show that we support other communities who are also facing this existential fear,” he says.

Conservative groups are pushing for major changes to the immigration system and for a border wall in exchange for a deal to save DACA. The rally starts at 6 P.M. at Cesar Chavez Plaza.

Recently, a judge ruled that the government has to keep issuing DACA renewals while a challenge to Trump’s decision to kill it plays out.

On Monday, the U.S. Supreme Court dealt the administration a blow by refusing to skip over the court of appeals and take up the case. Frost says his group will keep fighting.

“Even though this is definitely a positive step, there’s so much more to be done,” he adds. “If stuff isn’t constantly being talked about, people will just forget it.”

The group Promise Arizona is also behind the rally. The groups are raising funds to help as many DACA applicants as possible afford the application fee.