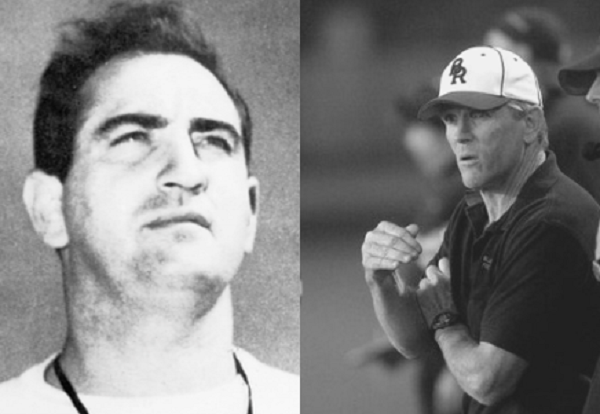 Ed Doherty(left) and Paul Moro will be honored in the Hall of Fame.

PHOENIX, Ariz. – August 6, 2019 – The Arizona Football Coaches Association (“AzFCA”) is pleased to announce that it has teamed up with the Grand Canyon State Gridiron Club (“GCSGC”) to create the Arizona Football Coaches Hall of Fame. The two organizations are announcing the inaugural class of inductees and will honor two former coaches, Ed Doherty and Paul Moro, at the induction ceremony to take place during the GSCGC’s Ed Doherty Award Luncheon on December 14, 2019 in Scottsdale, Arizona.

“The Grand Canyon State Gridiron Club is honored to include the induction of Coach Doherty and Coach Moro into the events at the Ed Doherty Award Luncheon,” said Ward Hickey, GCSGC President. “These inductions perfectly align with other awards that will be given that day, all celebrating the various levels of investment and commitment required to Make Arizona High School Football Great.”

“The focal point of the Arizona Football Coaches Hall of Fame is to celebrate and honor the members who have posted distinguished careers and a life-long commitment to the development of our young people through the teaching of leadership, values, victory and success,” said Rich Wellbrock, President of AzFCA and Head Football Coach at Phoenix Mountain Pointe High School. “You can’t really call yourself a head coach if those under your supervision, whether they are players or assistant coaches, don’t learn these things.”

“The Arizona Football Coaches Hall of Fame will be more than just the inductions,” said Wellbrock. “It will be an opportunity to inspire others coming up in the sport and take a break at the end of the high school football season to enjoy a moment of reflection on the reasons we chose this lifestyle. The inaugural inductees each represent the very core of our purpose and calling as football coaches.”

“Sharing this induction ceremony with the Grand Canyon State Gridiron Club at the Ed Doherty Award Luncheon gives us the opportunity to provide current players, families, and boosters from all across the state a chance to participate in celebrating the fundamental values, attitudes and behaviors that comprised these two great football coaches,” said Wellbrock. “Ed Doherty and Paul Moro are the first two of many that we will celebrate as standard bearers for one of the most exclusive fraternities in amateur sports – high school head football coaches.”

“The Grand Canyon State Gridiron Club believes that parents, athletes, administrators, coaches, and game officials are key elements to developing a comprehensive platform of grassroots, amateur athletics in Arizona,” said Don Kile, past president of GCSGC. “Doherty and Moro were coaches who knew that without all five pillars firmly in play, a successful game and effective youth development would be impossible. These two coaches demonstrated that hard work and preparation paid off under the lights on Friday night. More importantly, after their careers ended and their lives here with us had run the course, it is clear that their biggest contributions were to develop generations of young men that learned to build their lives and families on the same practices of hard work and team play. ”

About Ed Doherty
Doherty played quarterback at Boston College from 1941 to 1943, where he was nicknamed “The Brain”; for his innovative style. In the 1944 NFL Draft, he was selected 39th overall by the Washington Redskins, but opted to join the United States Navy. Following his military service, he began his coaching career at the University of Notre Dame in 1946. Doherty became the head coach at Arizona State University from 1947 to 1950. In 1957 and 1958, he was the head coach at the University of Arizona. He is the only person to serve as head coach for both ASU and UofA.

Doherty’s honors include an NCAA National Championship at Notre Dame and two state championships at St. Mary’s High School. He retired from his coaching career in 1982. The Grand Canyon State Gridiron Club serves as stewards of the Ed Doherty Award, which was first presented in 1987. In 1991, Salpointe Catholic named their new stadium in honor of Doherty.

About Paul Moro
Paul Moro won more high school football games than any football coach in the state’s history. He led Blue Ridge (Lakeside, Ariz.) to a state-record 13 state championships and later coached at Poston Butte and Marcos de Niza. Coach Moro played linebacker in college and was a scholarship golfer. He was the Arizona Republic Coach of the Year for small school football on several occasions. In the 1990’s Coach Moro’s teams won 65 games in a row. Players that he coached from small school programs have gone on to play major college football, play in the NFL, and some are even high school coaches to this day. Coach Moro won his 13th state title after being inducted into the Arizona Athletic Coaches Hall of Fame. Moro was selected as the National High School Athletic Association’s Football Coach of the Year in 2011. Moro finished his 29-year career with 336 wins.

About the Arizona Football Coaches Association
The Arizona Football Coaches Association educates administrators, teachers and football coaches on the latest professional services in order to assist student athletes in reaching their goals both in the classroom, on the field, and in life. The organization focuses on advancing high school athletic and academic competitions through governance, coaching, officiating and community advocacy.