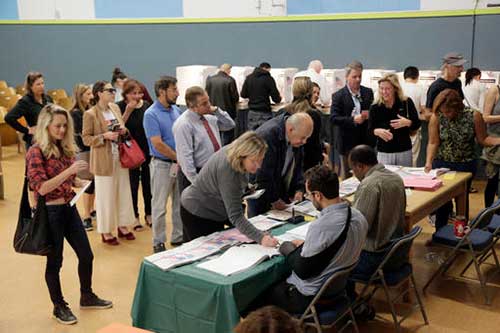 WASHINGTON (AP) — Donald Trump’s tweets can’t erase the reality that he lost the popular vote in this month’s election, according to The Associated Press’ vote-counting operation.

The president-elect tweeted Saturday that he’d have won the popular vote “if you deduct the millions of people who voted illegally.” He also alleged “serious voter fraud” in California, New Hampshire and Virginia and complained that the media aren’t covering it.

Not only did he present no evidence to back up those claims — there apparently isn’t any. Asked to provide supporting evidence on Monday, Trump’s transition team pointed only to past charges of irregularities in voter registration. There has been no evidence of widespread tampering or hacking that would change the results of the presidential contest, and for good reason, experts said.

For one, it would be highly impractical. The nation’s election system is decentralized, a patchwork of state laws whose differences would be nearly impossible to target on a large scale, said Wendy Weiser, director of the Democracy Program at the nonpartisan Brennan Center for Justice.

“You would need to have hundreds and hundreds of thousands of people conspiring with insiders and with one another,” Weiser said. “To keep a conspiracy of that magnitude secret is just unthinkable.”

“The process is not rigged anywhere in America,” said R. Doug Lewis, who headed the nonprofit Election Center for more than two decades. Interest groups, bloggers and others across the political spectrum keep anecdotal lists of instances of election fraud, he said, but “when each side is forced to come up with factual examples where that has happened, where they have to name names … almost always the allegations go away.”

On Twitter, Trump has returned to two well-worn techniques: denying he’s lost anything and playing on public distrust.

The AP, which called Democrat Hillary Clinton the winner in all three states, said its vote count operation found no significant differences between the county-by-county vote totals and those released statewide on election night in California and Virginia. In New Hampshire, the AP’s vote totals were reported directly to the news agency by town clerks and were verified by AP in most towns before the count was completed. The totals also were certified by New Hampshire’s secretary of state.

Trump’s charge that he actually won the popular vote if the “millions of people who voted illegally” had not been counted mimics one posted on Infowars.com, a conservative website that traffics in conspiracy theories.

Trump’s win in Michigan, certified by state election officials on Monday, gave the Republican an additional 16 electoral votes, bringing his total to 306, to Clinton’s 232.

There is recount drama resulting from the 2016 election, but it’s not being initiated by Trump loyalists.

Green Party candidate Jill Stein had raised $6.3 million by Monday for the recount she’s seeking in Wisconsin, Michigan and Pennsylvania — places that Clinton, a Democrat, had thought were safely in her column. Instead, Trump won all three and with them the electoral votes needed to win the White House. Clinton’s campaign is supporting the Wisconsin recount.

Stein, too, hasn’t provided evidence of voting irregularities. She says “cyber hacking” affected the vote outcomes in those states. The Wisconsin Elections Commission voted Monday to proceed with a recount and bumped the estimated cost to $3.5 million. Stein says she’ll pay for it — and could ask her supporters for more money — even though she calls the estimated $3.5 million cost “exorbitant.”

In Michigan, Stein’s lawyer notified election officials Monday that she will file a recount petition on Wednesday. Trump would have seven days to file objections to her request.