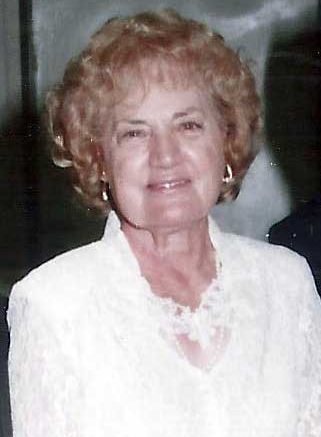 Anita was raised in France and attended schools there. She met a young man, Ernesto Beltran, from Douglas, while he was serving in the military there in France. The couple soon fell in love and married Jan. 21, 1946, in Marseille, France, and honeymooned in Paris.

A few short months later, Anita, as a war bride, was shipped home to Douglas to live with Ernesto’s parents. She only spoke French and they spoke Spanish and English so, needless to say, it was a rough start for all of them. She was also in shock when she arrived as she “had seen all the John Wayne movies and everything was green and beautiful; all she saw in Douglas was tumbleweeds and dust.” Anita started going to school there in Douglas to learn English and Spanish so that she would feel more comfortable in her new surroundings.

When Ernesto was released from military service, the couple moved to California along with Ernesto’s brother, Ben, to find work.  They decided to marry in the United States and were wed again March 20, 1948, at Our Lady of Guadalupe Church in Bakersfield. They later returned to Arizona, making their home in Thatcher.

The couple never had children — so they were very close and did everything together — and were blessed to have many nieces and nephews to spoil. They were able to celebrate their 50th wedding anniversary together. Sadly, on May 14, 2001, Ernesto passed away, leaving Anita on her own. But, luckily, she had a dear friend, Sally Villalba, who stayed by her side and helped her through the tough times.

Anita is survived by: her sister, Josephine “FiFi” Bourrelly, of France; her sisters-in-law, Emma (Chapo) Barcelo, of Douglas, and Salud “Sally” (Chema) Garcia, of Mesa; her brother-in-law, Ramiro (Yvonne) Beltran, of Pamona, Calif.; her dear friend, Sally Villalba; along with many nieces and nephews.

She is preceded in death by: her beloved husband, Ernesto Beltran; her parents, Jose and Josephine Zamora; her sisters, Eréne Macari, Angéle Ballatore and Dolores Bandaccari; her sister-in-law, Concha Luna; and her brothers-in-law, Robert (Lupe), Reuben (Rosa) and Ben (Sally) Beltran.

A viewing will be held Friday, May 22, 2020, at 9:30 a.m. at McDougal Caldwell Funeral Chapel. The recitation of the rosary will be held at St. Rose of Lima Catholic Church beginning at 10:30 a.m., with the Mass of Christian burial at 11 a.m. The graveside service will follow at the Safford Cemetery.