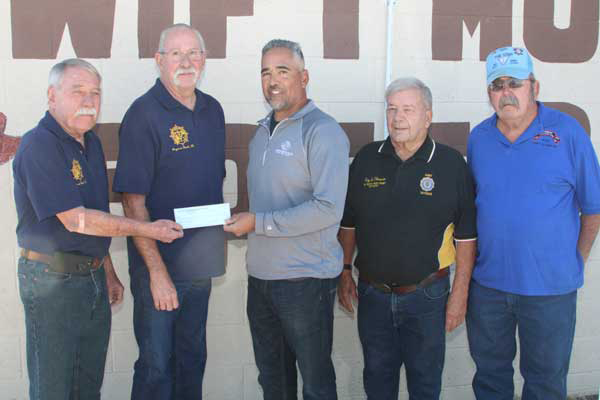 Members of American Legion Swift-Murphy Post 32 and the 40 and 8 Club present Mick Ruiz, center, with a check for $1,000 for teen programming at the Boys and Girls Club of the Gila Valley. - David Bell Photo/GIla Valley Central

SAFFORD — The 40 and 8 Club of American Legion Swift-Murphy Post 32 donated $1,000 to the Boys and Girls Club of the Gila Valley on Wednesday.

“We (the American Legion) are not supported by anything; we have to do our own internal fund-raising. We were able to dedicate $1,000 to this worthy cause and it was the right thing to do this year,” said Steve Oller, post commandant.

Mick Ruiz, executive director for the Boys and Girls Club, said the funds will help expand programming for pre-teens and teens during the second semester of the school year.

“We haven’t had a large (number of teens) show up because of our limited capacity at the club itself, so this money will help support that and the programs that we will be providing in the spring,” Ruiz said.

The 40 and 8 Club is a nationwide organization formed by Legion and Legion Auxiliary members, and is dedicated to supporting child welfare and care organizations. In 2014, membership was opened to all honorably discharged veterans and all active-duty military, regardless of Legion membership.