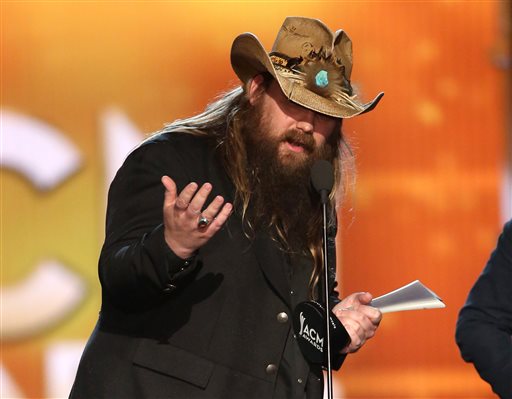 Chris Stapleton accepts the award for album of the year for Traveller at the 51st annual Academy of Country Music Awards at the MGM Grand Garden Arena on Sunday, April 3, 2016, in Las Vegas. (Photo by Matt Sayles/Invision/AP)

Jason Aldean beat Luke Bryan and Miranda Lambert for entertainer of the year at the Academy of Country Music Awards — a first for the singer after earning nominations for the top prize over the years, while Chris Stapleton cleaned house in other categories.

Aldean also won over Garth Brooks and Eric Church on Sunday at the MGM Grand Garden Arena in Las Vegas.

“I was just starting to think this one wasn’t in the cards for me,” Aldean said onstage near the end of the three-hour show, which aired on CBS. “This is one of the best nights of my professional career.”

Stapleton had an even better night. It was a repeat of the recent Grammy Awards and last year’s Country Music Association Awards. Stapleton took home six awards, including album, song, male vocalist and new male vocalist of the year (he won twice for album and song of the year as the artist and songwriter-producer).

Stapleton also shined with an impressive performance of the song, “Fire Away.” His special guest this time wasn’t Justin Timberlake, but his wife, Morgane, who sang next to her all-star hubby.

The critically-acclaimed singer-songwriter was humbled and shocked as he won the most awards of the night.

“You got to be kidding me. I thought for sure we were going to be girl-crushed on this one,” Stapleton said onstage after winning song of the year for “Nobody to Blame” and beating Little Big Town’s mega-hit “Girl Crush.”

Other top moments from the show included Dolly Parton partnering with Katy Perry for “Coat of Many Colors” and “Jolene.”

“Y’all finally got me in a pair of boots,” Perry said onstage, sporting a bright pink and yellow country-flavored get-up. Parton wore a 2016 sparkly version of the famous coat she said “represents a very special time in my life” and was part of last year’s NBC TV-movie about her childhood, “Dolly Parton’s Coat of Many Colors.” She won the Tex Ritter Award for films that honor country music.

Eric Church also had a special moment when he paid tribute to rock icons like David Bowie, The Eagles’ Glenn Frey, Lemmy Kilmister of Motorhead and former Stone Temple Pilots frontman Scott Weiland. Bryan introduced Church and said the performer was a big fan of vinyl records and was set to pay tribute to “four of his musical heroes.” Church performed the track, “Record Year,” and intertwined the late performers’ songs into his performance.

Carrie Underwood earned loud applause after singing “Church Bells.” She was nominated for female vocalist of the year, but lost to Miranda Lambert, who won the honor for record-setting seventh time.

“I love to see here tonight a bunch of new country girls up here shining and singing their great songs that they wrote themselves,” said Lambert, who also won vocal event of the year for “Smokin’ and Drinkin'” with Little Big Town. “I’m really excited for women in country music, and I’m glad to be here as one of them.”

Lambert was referring to breakthrough singers like Ballerini, who won new female vocalist of the year, and Cam, who was nominated for six awards and sang her Grammy-nominated hit, “Burning House,” at the ACMs. They represent a small number of women who performed Sunday. In typical fashion of the last few years — at country awards shows and country radio — the night was dominated by the men.

Blake Shelton, who didn’t host this year’s ACMs like usual with Bryan, joined his former co-host to open the show with a performance, taking the spot of new co-host Dierks Bentley.

Bentley was waiting backstage to jump into the performance before Shelton took his microphone to perform “Huntin’, Fishin’ and Lovin’ Every Day” with Bryan. “The Voice” coach followed the collaborative performance with his own, of his recent single “Came Here to Forget.”

After the performance, the hosts told a string of jokes, including one about country singers in the audience taking credit for the breakthrough career of leading nominee Chris Stapleton, who has written hits for dozens of country stars.

Stapleton’s six of seven wins ties him with Brooks and Faith Hill for most wins in a night at the ACMs.