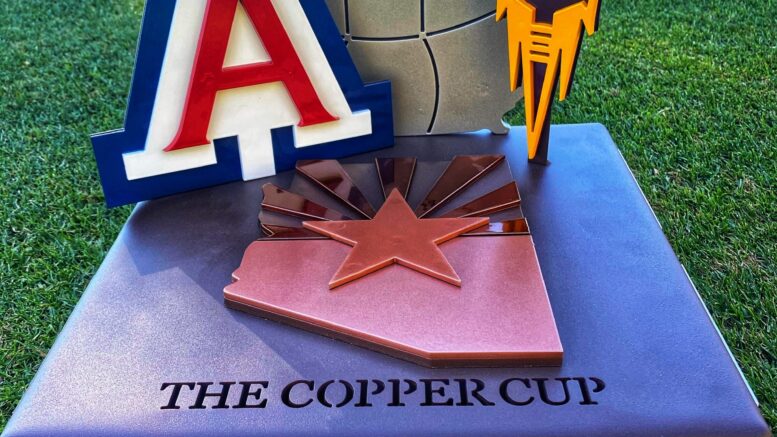 Maricopa, Ariz. (January 14, 2021) –  Ak-Chin Southern Dunes Golf Club in Maricopa, Ariz. will host “The Copper Cup” this Sunday, January 17th and Monday, January 18th. The two-day, four-round match will pit the University of Arizona Wildcats versus the Arizona State University Sun Devils men’s golf teams against each other in a Ryder Cup-style competition.

Spectators are invited to attend The Copper Cup free of charge and will be required to wear masks and observe proper physical distancing. In addition, masks are required at all times when in or around the clubhouse and patio area. Masks are allowed to be removed if seated and actively eating or drinking in the Arroyo Grille (50% seating inside and spaced-out patio seating). There will be no spectator carts issued as carts are reserved for players, coaches, media and other paying golfers. Spectators must stay on the cart paths only while on the golf course.

“The Copper Cup is the first college golf tournament of the spring and is a great way to celebrate the Territorial Cup rivalry and the very high level of college golf found in Arizona,” said Sun Devil Head Coach Matt Thurmond. “I’m thankful for Ak-Chin Southern Dunes and the two athletics departments that have worked together to support this idea and make it happen. Some great golf and camaraderie can be expected.”

“Our team could not be more excited for the opportunity to open up the season in Arizona playing our rivals in a very recognizable Ryder Cup-style format,” said Arizona Head Coach Jim Anderson. “While we all understand the importance of this rivalry and competition, it has been outstanding conceptualizing this idea with Coach Thurmond and the ASU staff along with members of the Ak-Chin Southern Dunes team, including General Manager Brady Wilson.”

In addition to hosting The Copper Cup, Ak-Chin Southern Dunes Golf Club will also be a host site for the 2026 Men’s Golf NCAA Regionals. Ak-Chin Southern Dunes, named a “Top 100 Golf Course You Can Play” by Golf Magazine, will be one of six Regional sites in the U.S. with each site hosting 14 collegiate teams. The top five teams from each Regional will advance to the NCAA Championships to be held in 2026 at La Costa Resort and Spa in San Diego, Calif. Exact dates for the Ak-Chin Southern Dunes Regionals will be announced at a later date, but the tournament is expected to take place in mid-to-late May 2026.

Ak-Chin Southern Dunes Golf Club was designed by Brian Curley and PGA TOUR veteran Fred Couples in 2002. Originally developed as a private club by private investors, the championship Australian Sandbelt-style golf course sits on 320 acres of land that was once a part of the Ak-Chin’s May 1912 reservation before it was removed by Presidential Executive Order in late 1912. Nearly 100 years later, in 2010, the Ak-Chin Community recovered its sacred land when it purchased the golf facility and opened the course to public play. The course currently boasts several coveted accolades, including being included on Golfweek’s coveted rankings of the “Top 100 Resort Courses” and “Best Courses You Can Play.”

Ak-Chin Southern Dunes has played host to numerous major tournaments and events since opening in 2002, serving as an annual U.S. Open qualifying site, host course for the PING Southwest Section PGA Section Championship and several top collegiate men’s and women’s golf tournaments. The course annually hosts top amateurs in the Tucker Amateur in September and the Saguaro Amateur held in early January. Both events are part of the Troon Saguaro Amateur Series, a multi-tournament series providing high-level amateurs a chance to compete throughout the year.