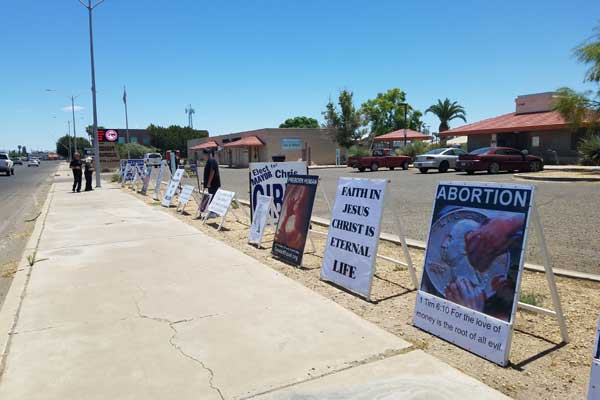 SAFFORD —While many celebrated Memorial Day weekend by barbecuing in the backyard, camping on Mount Graham or spending time with family, Gary Roby and others who support the group Created Equal posted placards along U.S. Highway 70 in front of Firth Park and the Graham County Chamber of Commerce on Saturday, calling for an end to abortion in America.

“I don’t want anybody in these three communities — Pima, Safford, Thatcher — not to know what abortion truly is. It is the slaughtering or the dismembering of a child who is created in the image of God,” Roby said.

Roby said it was the 13th month he and his fellow supporters have set up their signs in the Gila Valley.

“Some people will stop and thank us for what we’re doing; some people will go by and give us this (a rude gesture). We get quite a bit of that,” he said.

Created Equal is based out of Columbus, Ohio, and typically focuses its message on college campuses. It was founded in 2011 by Mark Harrington, who previously served as the president of the Pro-Life Institute and, before that, as the executive director for the Midwest branch of the Center for Bio-Ethical Reform.