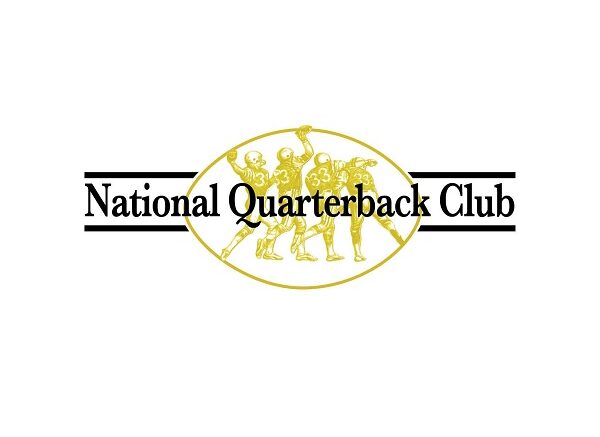 “The National Quarterback Club honors uniquely courageous actions. We believe that telling the stories of those who act with leadership and courage inspires future generations to follow that example. At a time when there is much consternation, our world needs to recognize courageous leadership, respect it and require it,” said Don Kile, NQBC President. “These awards represent a veritable timeline of great quarterbacks and great men in American football history. If there is a lesson in the lives of the four men we honor this year, it is that none of us can afford to be lookers-on standing on the sidelines. The energies and talents of all of us are needed to meet the challenges of our communities.”

About the Class of 2020 Hall of Fame Inductees

Roman Gabriel played 16 years of professional football in the NFL. Five years before the NFL-AFL Common Draft began, Gabriel would be the first AFL pick and the second overall pick in the 1962 NFL Draft. He played for the Los Angeles Rams for eleven seasons, then five seasons for the Philadelphia Eagles.

A two-time All-American at North Carolina State University and two-time ACC Player of the Year, Gabriel finished his college career holding virtually every Wolfpack passing record. Also an academic All-American, Gabriel saw his jersey retired after his senior season. As captain of his team, Gabriel set 22 school and nine conference football records. In his three years at NC State, he threw for 2,961 yards and 20 touchdowns, and rushed for 15 more. When the Atlantic Coast Conference’s 50th Anniversary Football Team was announced in 2003, Gabriel listed among the top 50 players in the   history of the ACC.

After joining the Los Angeles Rams in 1962, Gabriel would share the quarterback duties with Zeke Bartkowski and Bill Munson until 1966, when George Allen took over as the Rams’ head coach. Gabriel started all 14 games of the 1966 season and led the Rams to their first winning season since 1958. In 1967, Gabriel took the 11–1–2 Rams to the playoffs as NFL Coastal Division Champions. The 1967 Rams finished as the highest scoring team in the NFL. Gabriel threw for 2,779 yards and 25 touchdowns. He was a Second-team All-Pro and posted his first Pro Bowl.

The 1969 season was perhaps Gabriel’s best season with the Rams. He threw 24 touchdowns and only seven interceptions. He was named the NFL’s Most Valuable Player by the AP and NEA, the Player of the Year by the UPI, and was voted All-Pro and received his third Pro Bowl.

In 1970, the NFL-AFL merger would realign the schedules and conferences. From 1967-70, Gabriel led the Rams to a 41-14-4 overall record, and was named to three Pro Bowls during that four-year span.

After the 1972 season, Gabriel was traded to Philadelphia where he would post another great season and be named NFL Comeback Player of the Year as he led the Eagles with 270 completions, 460 attempts, 3,219 yards and 23 touchdowns (all league highs). With Gabriel as the starting quarterback, the Eagles offense was the most prolific passing game in the NFL.

In his career, he had a winning record of 86–64–7 passing for over 29,000 yards and 201 touchdowns. He is the only quarterback from his era to still be ranked high in the “lowest interception percentage” category in NFL passing statistics. He still holds the Rams’ franchise career records for touchdown passes (154), passes attempted (3,313), and wins by a starting quarterback (74).

James Harris played college football at Grambling State University from 1965 to 1968 where, as quarterback, he led the Tigers to three of four straight Southwestern Athletic Conference titles and was named the MVP in the 1967 Orange Blossom Bowl Classic. As a senior, Harris passed for 1,972 yards and 21 touchdowns on only 225 attempts. In three years as Grambling’s starting quarterback, he led the Tigers to a 24-5-1 record.

Starting Week 1 for the AFL’s Buffalo Bills after being drafted in the eighth round of the 1969 Common Draft, a full year before the NFL would merge with the AFL, Harris became the first black quarterback to start a season opener in either league.

After three years with the Bills, Harris was released and signed with the Los Angeles Rams in 1972.

Early in the 1974 season, Rams head coach Chuck Knox promoted Harris to the starting position. In his starting debut for the Rams against the San Francisco 49ers, Harris completed 12 of 15 passes for 276 yards and three touchdowns and rushed for another as the Rams won easily, 37-14, at the Los Angeles Coliseum. The performance earned Harris a perfect passer rating for the game. Harris became the Rams’ starting quarterback for the remainder of the 1974 season and led the team to seven wins in its last nine regular-season games, a second consecutive NFC Western Division title and the Rams first playoff victory since 1951. Harris became the first black quarterback to start and win an NFL playoff game.

Harris was named to the NFC Pro Bowl team in 1974 and was awarded MVP of that game.

Shack’s leadership and strong arm helped lead the team to another division title in 1975. Harris, in turn, became the first African-American to open a season as his team’s starting quarterback in National Football League history. Despite a series of injuries during the 1976 season, Harris’ 89.6 passer rating that year was tied for the highest in the NFC.

Harris was traded to the San Diego Chargers prior to the 1977 season where he would play three years before retiring. After his playing career concluded, Harris served in the head office for the Baltimore Ravens, Jacksonville Jaguars, and Detroit Lions before officially retiring from the NFL in 2015.

Kurt Warner played 16 years of professional football, including three seasons with the Arena League’s Iowa Barnstormers and one in Europe.

In December 1997, after the St. Louis Rams’ season had ended, Warner signed a futures contract to enter the NFL. In February 1998, he was dealt to NFL Europe to play for the Amsterdam Admirals, where he would lead the league in TDs and passing yards during the 1998 season.

After one season in Europe, Warner would rejoin the Rams at the beginning of the 1999 season. After a season ending injury to Trent Green, Rams coach Dick Vermeil named Warner as the Rams’ starter. Warner put together one of the top seasons by a quarterback in NFL history, throwing for 4,353 yards with 41 touchdown passes, and a completion rate of 65.1%. With Warner on the lead, the Rams’ high-powered offense was nicknamed “The Greatest Show on Turf” posting the first of three consecutive 500-point seasons, an NFL record.

After one year with the New York Giants in 2004, Warner signed with the Arizona Cardinals.

In Week 3 of the 2006 season, Warner passed the 20,000-yard passing milestone in his 76th NFL game, becoming the second-quickest quarterback in NFL history to accomplish the mark. It took a mere one game more than the current record-holder, Dan Marino.

Warner led the Cardinals in a furious 2008 season throwing for 4,583 yards, 30 touch downs and a pass completion percentage of 67.1%. He earned his fourth Pro Bowl as the top-rated passer in the NFC for the third time in his career leading the Cardinals to their first Super Bowl. Despite a heartbreaking final minute loss to the Pittsburg Steelers, Warner was spectacular throwing for 377 yards, a completion percentage of 72.1% and a quarterback rating of 112.3.

His NFL career included stints with the St. Louis Rams and New York Giants before joining the Cardinals. He retired in Arizona following the 2009 season after his sixteen years of professional football yielded 44,910 yards passing and 406 TDs.  Upon his retirement, Warner devoted time to his family, including his wife, Brenda, and seven children. He carved a successful career in the broadcast booth, and dedicated time to coaching high school football in Arizona. He pursued a passionate dedication envisioned by Brenda in the creation of Treasure House, a unique active living community for young adults with cognitive and developmental disabilities.

Doug Williams is best known for his performance with Washington in Super Bowl XXII against the Denver Broncos. He was named Super Bowl MVP for his efforts logging 340 yards passing and four touchdowns during the second quarter of game, setting a single-quarter record, and securing the win over the Denver Broncos. On January 31, 1988, Williams became the first African-American quarterback to win a Super Bowl.

Williams was an All-American quarterback at Grambling State University where he played for legendary head coach Eddie Robinson. As a four-year starter, Williams won 84% of his games and guided the Tigers to a 35–5 record and three Southwestern Athletic Conference Championships.

In 1977, Williams led the NCAA in several categories. He posted 3,249 total yards from scrimmage and another 3,286 passing yards. He threw 38 touchdown passes that year and would finish fourth in the Heisman Trophy voting behind Earl Campbell and was twice named Black College Player of the Year among HBCU schools.

The Tampa Bay Buccaneers drafted Williams in the first round (17th overall) of the 1978 NFL Draft making him the first African-American quarterback taken in the first round of an NFL draft. Preparing his 1978 NFL Draft summary, Tampa Bay Offensive Coordinator Joe Gibbs recruited Williams writing in his scouting report “Williams is the best quarterback in the 1978 draft with a big-time arm with perfect passing mechanics” also noting Williams as “a natural leader”.

Before Williams joined the Bucs in 1978, the team had won just two games in the first two years of the franchise. With Williams as a starter, the Buccaneers went to the playoffs three times in five seasons and played in the 1979 NFC Championship Game.

Williams’s finest seasons in Tampa came in 1980 and 1982. He was named the Buccaneers’ MVP both years after passing for more than 3,000 yards in each of those seasons. A deceptive runner, he rushed for a combined 579 yards and eight touchdowns during that two-year span.

After the 1982 season and the conclusion of his contract in Tampa Bay, Williams departed the NFL and bolted to the upstart USFL and the Oklahoma Outlaws, later known as the Arizona Outlaws. Williams had two big seasons in the USFL before the league folded at the end of the 1985 season. He threw for 6,757 yards and 36 TDs during his tenure in the USFL.

Williams returned to the NFL in 1986, joining Washington to reunite with his former offensive coordinator, Joe Gibbs, who was now Washington’s head coach. He shared quarterback duties with Jay Schroeder in 1987, until he staged a late-game comeback win over the Minnesota Vikings in the season finale that solidified his role as the starter for the playoffs. By the end of the 1987 season, when Washington had qualified for the playoffs, Williams and his 94.0 passer rating were headed to Super Bowl XXII in which they routed Denver.

When Williams retired in 1989, he left the professional playing field with 23,755 yards passing, 136 passing touchdowns and another 19 rushing touchdowns. In 1998, Williams was named head coach at Grambling State University, succeeding Eddie Robinson, where he led the Tigers to the consecutive Southwestern Athletic Conference titles. He currently serves as the Director of Player Development for the Washington Football Team.

About the National Quarterback Club

The National Quarterback Club is guided by a comprehensive mission, a clear vision, and consistent values. Through its various award programs, the club recognizes outstanding athletes for their qualities and achievements on and off the playing field, and serve as a model for comprehensive excellence in athletic achievement, academic success, and greater social affinity. In 1985, the National Quarterback Club began a tradition of hosting annual fundraising events to honor the National Quarterback of the Year in professional, collegiate and high school ranks. Annual awards dinners have been hosted in great sports cities such as Washington D.C., Miami, Tampa Bay, Jacksonville, Charlotte, Green Bay, Denver, St. Louis, Minneapolis, Houston and Scottsdale, Arizona.