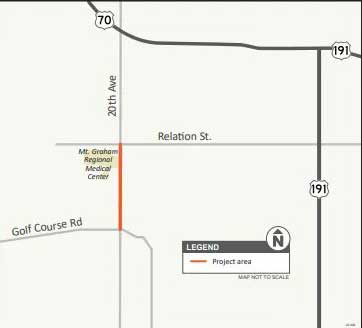 SAFFORD — On its social media, the city of Safford announced a temporary stoppage of improvements to 20th Avenue.

“There is a statewide shortage of materials required that has caused the project to stall. The city would like to apologize to its citizens and the surrounding communities for the inconvenience. The project will resume when materials become available,” city officials wrote.

Originally estimated at $4.4 million, material shortages and supply chain issues in 2021 increased the cost of the project by an additional $1.3 million. That deficit was made up by use of federal funds made available due to the pandemic, and an additional $500,000 from the state.

Safford isn’t the only community suffering due to material shortages. Thatcher Town Manager Heath Brown previously informed the Town Council that while improvements to High School Avenue are continuing, work had slowed while waiting for needed supplies to arrive.