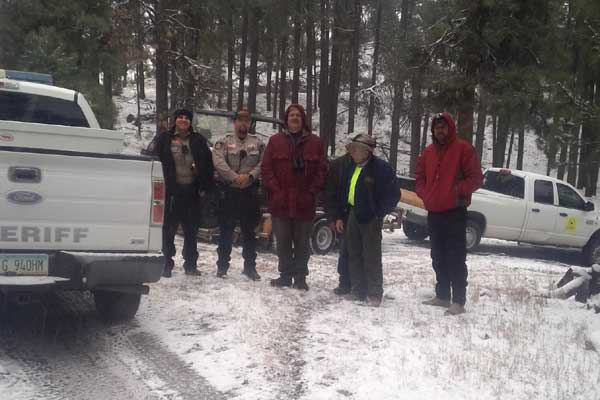 Greenlee County Sheriff's Office and Greenlee Search and Rescue successfully found a hunter who was lost during the snow storm and freeze Monday night into Tuesday morning. The hunter suffered no serious injury. - Contributed Photo

At 10:30 p.m. Monday, Greenlee County Sheriff’s Office received notification that a hunter may be lost.

After initially responding and unable to find the man, a deputy activated Search and Rescue at 1 a.m. and began the trek about three miles from U.S. Highway 191 at milepost 218. Volunteers had difficulty getting vehicles through the snow and icy conditions, and began to hike before the hunter was found.

He had found shelter and stayed huddled when he realized the temperatures were falling and the snow was not letting up.

He suffered no serious injury, was given food and water, and taken back to his camp.

DPS Air Rescue was initially called, but was unable to assist due to the storm.